Austria, as any other country, has its share of very conservative people. [And I mean very conservative.] One of them is Andreas Khol, who sees himself (I think) as the defender of Austria’s Catholic Morale(tm). He was one of the people, who wanted to have god in the European Constitution. [Together with Christoph Schönborn, who I mentioned here already.]

So imagine my surprise when I heard that he, Herbert Kohlmaier [German link] and Erhard Busek (amongst others) started a petition [German link] in Austria to get rid of the celibacy in the catholic church and therefore increase the number of guys wanting to become priests. In fact, that’s not all they want:

To this purpose, [the petition] thinks the following steps necessary:

Quite an agenda, especially considering the libertine that is the pope. I don’t know if the petition will help at all, but that’s not the thing I wanted to write about.

I saw this programme about Khol’s plans on TV and I tell you, it was great. Here’s a quick run-down.

END_OF_DOCUMENT_TOKEN_TO_BE_REPLACED

Head over to lekhni’s blog and read this bedtime story about blog freedom. And do follow the links. The whole thing stinks [not lekhni’s story, the story behind that].

The Gathering is the Booker Prize winning novel by Anne Enright. Although it’s short, it takes a while to read it. I’m not really sure if it’s worth that effort.

After her brother Liam dies, Veronica Hegarty and the remaining members of her family gather together to say their goodbyes. Woven into these current proceedings is the life and love story of Veronica’s grandmother Ada and how that past influenced the present and especially Liam.

Also a beautiful cover. The blue eyes are often referrenced in the text as “Hegarty eyes”.

END_OF_DOCUMENT_TOKEN_TO_BE_REPLACED

Blindness is the adaptation of José Saramago‘s book of the same title (my review here). It’s directed by Fernando Meirelles, who’s most famous for The Constant Gardener and Cidade de Deus.

The adaptation is very close to the book and the plot is the same: In a city probably somewhere in Europe people start going blind. But instead of seeing nothing (meaning: all black), they “see” only white. The blindness spreads epidemically. The authorities, in a desperate attempt to stop it, lock the blind people up in an abandoned asylum without any help. There they slowly succumb to chaos and power struggles. The story follows a group of seven people, who are thrown together by these events.

END_OF_DOCUMENT_TOKEN_TO_BE_REPLACED

1. Answer each of the questions below the cut using the Flickr search engine.
2. Choose a photo from the first three pages.
3. Copy the URL of your favorite photos here – http://bighugelabs.com/flickr/mosaic.php.
4. Then share with the world.

Now, you can guess which picture answered which question.

Domino Table. Such a cool idea.

Nameless LeTTer: leave bookmarks in books for other people to find.

Pes makes wonderful stop motion movies. You might know Western Spaghetti, but he has tons of cool stuff.

1000 novels you must read: Love, Crime, Comedy, Family and Self, State of the Nation, Fantasy and Science Fiction, War and Travel

An interview with Dennis Lehane, who most be a really interesting guy.

How books are made:

Pride and Prejudice and Zombies.

There’s probably gonna be a Dr. Horrible sequel! Yay! And by the way, when will the DVD come to Europe?

The National Film Board of Canada put their archive online for free.

Star Wars: Retold (by someone who hasn’t seen it).

A wrestler talks about The Wrestler.

There’s going to be a Graveyard Book movie. Apparently, it will be live action and directed by Neil Jordan.

Guy drives his car into an abortion clinic. So sick.

And while we’re speaking of abortions:

Women and their sexuality: A new study with interesting findings.

Kermit Bale (via Liberrydwarf, who finally is back from her vacation) 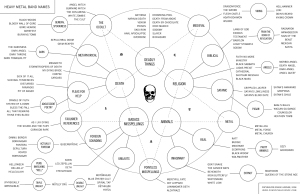 The Periodic Table of Awesoments:

If movie posters were honest.

And then Buffy staked Edward.

Ever written a letter of complaint? Do it like this!

The exhibition concentrates on Hopper’s influence on cinema and his view of architectural space, but it also features photographs working with the same principles as he did in his paintings – people, who are kind of frozen in their loneliness, light that makes the paintings come alive.

It’s very interesting to see the parallels that are drawn between the different artists, who work with very different media – from painting to sculptures, film to print.

It’s a surprisingly short exhibition – even though there are so many different artists, you can comfortably see everything in an hour and a half – which is exactly the amount of time my brain gives me before it goes in information overload mode.

Although I didn’t like all the artists (and let’s be honest, there’s little chance of that because there are just so many of them), I enjoyed myself thoroughly.

[After the break see pictures of the artists’ works.]

END_OF_DOCUMENT_TOKEN_TO_BE_REPLACED

John Updike died of lung cancer at the age of 76.

“Where do we come from?”

“Where are we going?”

Here are the answers from the first results, respectively:

“Where do we come from?”

Paul Gauguin’s Where Do We Come From? What Are We? Where Are We Going?

“Where are we going?”

So, there. Now you’re enlightened. :)

I am standing on the top of the mountain. In front of me is the white guinea pig I had been following. Poor thing, I can almost hear its heart beating about 30 times a second and I am convinced that it will die pretty soon. I don’t think that guinea pigs are built for running up mountains being chased by complete strangers.

I am waiting for its instructions. There has to be a reason that it led me up here. It slowly raises its head and looks me in the eyes. I see it opening its mouth and goose bumps crawl over my skin.

It coughs. Then it drops down, still breathing, but apparently unconscious.

“This is not good,” I mutter to myself.

I look around – there’s absolutely nothing on this mountain top. What the hell am I doing here? Chasing after white guinea pigs! It’s fucking freezing!

I turn to leave. The universe can kiss my ass. Giving me dreams about white animals of all kinds and then sending me a guinea pig to follow. Do you know how fast these fuckers are? I’m glad I kept up at all. And then it just drops unconscious? If my destiny is to be mocked on top of a mountain, I’ll take my brother to climb Mount Everest. Or something with a lift. Mission accomplished.

“Uhm, yeah, sorry about that. I told Erwin that he should train more before going on a recruiting mission, but he wouldn’t listen. ‘I’m in excellent form!’ he’d say. Arrogant little guy…”

Turning around, I find a white fox standing behind me, with a clipboard in his hand. I can see my name on it. He’s wearing glasses, perched closely to the edge of his nose.

“Well, it can’t be helped now. So, you must be Mary… Sue? Mary Sue? Good, good. Here’s the thing, Mary Sue. I’ve got a mission for you. Actually not only me, but my siblinghood. You see, we’re in charge… is everything okay?”

He must have noticed my staring at him with my jaw at sea level. It’s one thing to dream about white animals who will come to get you and you’re not sure if that’s a good thing. And when one of them actually appears and you run after it in the hopes that it will prevent you from taking that stupid exam you have been dreading all semester. But it’s quite another thing when you’re standing face to face with a talking fox who keeps checking his clipboard.

“Okay, honey, you’re already sitting. You just fainted and were out for about five minutes. Did you hurt your head when you fell?”

I can feel his paws on my head, softly checking it for any injuries.

“I think I’m fine. Really. I’m okay. I guess, I just have to live with the fact that I’m entirely insane. Must have been a psychotic break or something. I probably should call my mum and tell her that I’m talking to a fox and that I should really get psychiatric help.”

I babble. I very rarely babble. I really must have hit my head pretty hard.

“Don’t worry about that right now. Listen, let me tell you about what’s happening and then you can always decide if you need to go to the hospital. Alright?
“As I was saying, before you lost consciousness, I’m part of a siblinghood. We’re responsible for letting people know about their destinies. Kind of like fortune tellers, only not fake. For some people, this communication comes early on. We tell them that they’re destined to be doctors or fair or Starbucks customers. You see, destiny comes in very different shapes.
“Anyway, you are one of the people who gave us quite a headache. You’re smart, but no genius. You’re okay at everything, but excel at nothing. You…”

I interrupt him, “I know, okay, I know! These questions have been plaguing me for a while. You found my destiny? Great! Because I’ve been looking for it for quite a while. But it was nowhere to be seen. What is it? Is there some position open, which requires okay general knowledge and great pop culture trivia? Something where I just have to read the whole day? Am I actually talented enough to live of writing?”

I get more and more excited. Maybe this trip is worth its while! How often do you get told what your destiny is?

I see the fox shift uncomfortably. Or maybe he just needs to pee. I don’t know. I can’t really read fox facial expressions and body language yet.

“Well, you know, this might… I didn’t make the decision, keep that in mind… I mean. Hang on.”

He gets a small trumpet from behind a boulder and clears his throat.

“MARY SUE! You have come a long way and you have finally arrived. Today will be a day you will always remember because I will reveal your destiny.”

“Now, sweetie, Erwin’s brother Edwin will lead you down from the mountain. Have a good life! Ta-ta!”

I’m completely stunned. I don’t think that I can move. I can only watch the fox disappear, while a white guinea pig appears and introduces itself as Edwin.

Dazed I start my way down the mountain, my thoughts going round and round in my head. I was pretty sure before that I would never win the Nobel prize. But this? And he didn’t even tell me what ordinary meant! Is not liking anchovies ordinary? Is it ordinary that I brush my teeth before breakfast? Is it ordinary that I spend all my money on books?

The further down I get from the mountain, the stronger my resolution grows. I don’t let anybody make my decisions, not even a talking white fox. My life won’t be dictated by somebody’s views of ordinary or not ordinary. I will live my own life. And it will be glorious. Full with achievements and …

Shit. Did I just step on Edwin?