7th Son: Descent is the first novel in the 7th Son Series by J. C. Hutchins. You can read it in its entirety here or download the audiobook here. Or both!

Plot:
Shortly after the President of the US is assassinated by a four-year-old, seven men who have seemingly nothing in common get abducted by a shadowy government organisation. Slowly they discover what secret they all share – and what connects them to assassination.

Here’s what you need to know about 7th Son: Descent: It’s hard SciFi. It’s a thriller. It leaves you on tenterhooks. As far as I know, its sequel is not yet written, in any case not yet released. You’re going to hate J. C. Hutchins a little bit for that. And you should definitely read 7th Son: Descent. 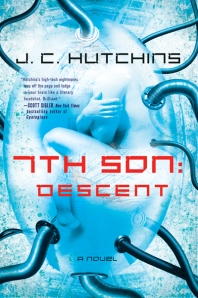 END_OF_DOCUMENT_TOKEN_TO_BE_REPLACED

I’m All Over It

The Diving Bell and the Butterfly is the autobiographical book by Jean-Dominique Bauby.

Plot:
Bauby suffered from a stroke at age 43, which left him completely incapable to move, except for his left eyelid. The book describes his life before the stroke and also his experiences suffering from the Locked-In Syndrom: having completely intact mental faculties, yet being unable to move at all.

The book is widely known and was also adapted into a movie. It’s a fascinating story and Bauby can only be admired for writing it. Yet the book itself is not very good. The prose is rather purple, the structure confusing and even though it’s really short I had to force myself to finish it (I probably wouldn’t have if it hadn’t been so short).

END_OF_DOCUMENT_TOKEN_TO_BE_REPLACED

We all know that the internet is screwing with our attention spans. Let’s celebrate that fact!

Here are 10 videos shorter than 30 seconds and completely awesome. Most are funny, though a few are more black humour than anything else.

In any case, you will have reached the end of this post in about 10 minutes. If your internet connection is really slow.

END_OF_DOCUMENT_TOKEN_TO_BE_REPLACED

Purple Rose of Cairo [German] is a play based on the film by Woody Allen currently at the Volkstheater [German] in Vienna. It was directed by Gil Mehmert and stars Heike Kretschmer and Till Firit.

Plot:
Cecilia (Heike Kretschmer) is stuck in a crappy job and an abusive relationship. To escape for a little while, she goes to the cinema. After she has seen the movie “Purple Rose of Cairo” for the fifth time, one character of the movie comes off the screen – Tom Baxter (Till Firit). Tom tells Cecilia he fell in love with her and that he plans to spend the rest of his life in reality with her.
Soon half of Hollywood is in uproar, including the actor who played Tom.

The movie is not Allen’s best work. But the play is pretty bad. The story is one good idea that isn’t actually able to support a whole plot. But were the movie had good actors and a good director, in the play the acting is so-so and the directing is really bad. What’s left is a production that falls completely flat.

END_OF_DOCUMENT_TOKEN_TO_BE_REPLACED

Shades of Grey: The Road to High Saffron is the first part in the newest SciFi sceries by Jasper Fforde.

Plot:
It’s Great Britain very far into the future. Democracy/Monarchy has been replaced by Colourtocracy: People are classified by the colours they are able to see. Greys are the lowest of the low, not being able to see any natural colours. The highest up the ladder are the Purples. The complete societal order is based on one book that is followed to the letter.
Eddie Russett is a Red. He is sent to a remote city as a punishment to conduct a chair census. When he meets the Grey Jane, his natural curiousity gets amplified by her defiance and he starts to question the status quo more and more.

Shades of Grey doesn’t have a lot of plot but is more concerned with the world building and the setting of the stage for the next novels in the series. But since it is a very interesting world and unlike anything I’ve ever seen in SciFi, I didn’t have a problem with that.

END_OF_DOCUMENT_TOKEN_TO_BE_REPLACED

Apocalypse literature now, and then.

Confessions of a Book Pirate.

Gateway drugs: what books are good for introducing non-SF readers to SF?

Bad (and Best) Science in SciFi.

Wu Tang Vs The Beatles.

If alien life exists, we have probably weirded it out by now.

From Arecibo, to the sound of vaginal contractions, to an ad for Doritos—a short history of Earthlings’ attempts to communicate with the cosmos. The vaginal sounds recording reached Epsilon Eridani and Tau Ceti in the late 1990s. New Scientist says, “It is unclear what sort of reply we should expect.”

Torchwood May Be Coming To America.

If you live on earth, you probably know that Avatar is the newest James Cameron movie, starring Sam Worthington, Zoe Saldana, Sigourney Weaver, Michelle Rodriguez and Giovanni Ribisi. And if you live on earth and like going to the movies, you’ve probably already seen this film.

Plot:
Some time in the future, there’s a space station on the planet Pandora where the humans are mining for a valuable mineral. To ameliorate the relations with the humanoid inhabitants, the Na’vi, the military has developped a program where a few people get avatars – Na’vi bodies humans can steer.
One of the people with avatars is Jake Sully (Sam Worthington). He quickly develops a friendship with Neytiri (Zoe Saldana), one of the Na’vi. But when the tension between the humans and the aliens becomes stronger, Jake will have to decide.

Avatar looks beautiful. And that’s where the good things stop. The story is crap. Ridiculous crap. The acting is so-so. The music is pompous. Actually, the whole film is pompous. Not to mention racist and ableist and just plain bad.

END_OF_DOCUMENT_TOKEN_TO_BE_REPLACED

The Princess and the Frog is the newest Disney movie and the first handdrawn movie they did in a long time. It was directed by Ron Clements and John Musker.

Plot:
Tiana dreams of owning her own restaurant, but unfortunately she lacks the funds for it. When her best friend invites the visiting Prince Naveen to a costume ball where Tiana does the catering, she seems to come one step closer to this dream. But then she meets Prince Naveen, who has been turned into a frog by an evil voodoo wizard. When she kisses him, instead of turning him back, she becomes a frog instead. Together, they have to figure out how to defeat the wizard and become human again.

The Princess and the Frog is sweet, but it’s pretty much standard fare. I mean, apart from the fact that Tiana is black and has an agenda. From a feminist perspective, I appreciate that. But in a year of strong animated features , it stands out as average.