Max Goldt is a German author who writes mostly essays or short columns about everyday things, language and basically anything he wants. He just published a new book – Zimbo – and is therefore doing some readings, two of which where in Vienna.

I will keep this short, since I don’t really know how to review a reading. :) Goldt’s writing is pretty great – funny and intelligent and it really lends itself ot be read aloud. [Though I can also very much recommend reading him for yourself.] He’s a good reader with a very nice voice.

His text choice was pretty good – he read mostly from his new book, but also some older stuff.

Summarising, seeing him do a reading is a good way to get to know his writing and it’s also very enjoyable even if you already know his stuff.

Plot:
Austria, in the very near future: the last elections have brought Austria a radically right prime minister, Siglinde Führer (Tamara Stern). Now, Austria is out of the EU, has got the Schilling back and is about to re-introduce the death penalty and basically making itself into a totalitarian state.
Most of the people are happy with her but some find the development worrying. One of the latter group is Raphael (Stefano Bernadin), a medical student. His best friend Michael (David Wurawa), another medical student, is black and therefore in the target group of the hate attacks. But both Michael and Raphael remain convinced that they are safe – they are doing nothing wrong, aren’t they?
Unfortunately, that’s not how mobs work…

Todespolka starts off with an interesting idea, but unfortunately the writing isn’t up to the challenges. The characters remain one-dimensional at best and I could have told you the ending after the first five minutes of the movie. 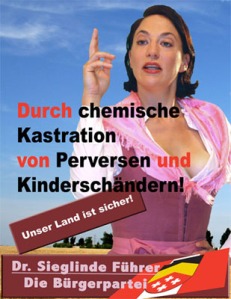 [Translation: Through chemical castration of perverts and pedophiles! Our country is safe!]

END_OF_DOCUMENT_TOKEN_TO_BE_REPLACED

Rufus Wainwright – Across the Universe

Plot:
Heinz Oberhummer is a theoretical physicist (astrophysics) and Werner Gruber is an experimental phyisicist (neurophysics). With Martin Puntigam as the host, they discuss various topics. I saw “The Physics of Star Trek” where things like Warp Drive, wormholes and telepathy are discussed with a good dose of humour and even better dose of actual science!!!111!!!eleventy!! There are even experiments.

Whether you’re interested in physics or not, Science Busters is great entertainment. Puntigam is weird (and self-deprecating) enough to match the science and Oberhummer and Gruber are awesome. I can recommend it to anyone. 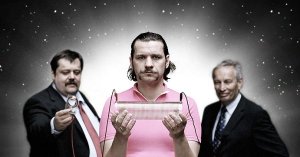 END_OF_DOCUMENT_TOKEN_TO_BE_REPLACED

Plot:
Lipsynch is divided in 9 chapters, each focussing on one person, though all the chapters are connected with each other and revolving around the themes of familiy, language, voices and communication and the impact communication (or the lack of) has.
Chapter one tells the story of Ada (Rebecca Blankenship) an opera singer who witnesses the death of a young woman on a plane. The young woman had a baby with her – Jeremy (Rick Miller) – which Ada ultimately adopts. Later she mets Thomas (Hans Piesbergen) and falls in love with him.
Chapter two is about Thomas, a neurosurgeon who, despite being with Ada, falls in love with a singer he treats for a brain tumor, Marie (Frédérike Bédard).
Chapter three is Marie’s story, her recovery after the surgery and how it affects her relationship with her (dead) father and her (mentally ill) sister, Michelle (Lise Castonguay).
Chapter four is Jeremy’s story, who has grown up to be a film maker and who shoots a movie, with which he tries to come to terms with his birth mother’s story.
Chapter five focusses on Sarah (Sarah Kemp), an ex-prostitute who now works as a cleaning woman for an older woman (who in turn is a mother figure for Ada). When Sarah stumbles upon radio reporter Tony Briggs (Rick Miller), she thinks that she recognises him from her past.
Chapter six is about Sebastián (Carlos Belda), a sound technician who has worked with Marie and Tony Briggs. Sebastián is called home to bury his father.
Chapter seven is about Jackson (John Cobb), a police officer in the middle of a divorce, who has to investigate Tony Briggs’ death.
Chapter eight is Michelle’s story after she gets released from the psychiatric hospital and has to rebuild her life.
And finally, chapter nine is about Lupe (Nuria Garcia), Jeremy’s birth mother and the story of how she got sold from Nicaragua into sex slavery in Germany.

Lipsynch is called a “Dramatic Marathon” and that’s definitely true for everybody directly involved – it’s 9 hours long (including breaks) and all the actors have multiple roles and are almost constantly on stage. But for the audience, it is one hell of a treat. The time passes quickly, the stories are completely engaging and the cast is really good. If you got 9 hours to spare, you should see it.

END_OF_DOCUMENT_TOKEN_TO_BE_REPLACED

All the trailers for the Cannes Film Festival.

It’s Festwochen time again! [For my reviews of last year’s plays, click here.] I got a lot of theatre tickets lined up in the next weeks, so expect a lot of reviews of this stuff.

Plot:
End of the 19th, early 20th century, Vienna. Fritz (Tom Hughes) and Theodor (Jack Laskey) are best friends, both pretty wealthy but have a very different outlook on life, though both are ultimately jaded. While Dori doesn’t seem to take anything seriously, Fritz is in a rather destructive relationship with a married woman and fears that her husband found out about them and will challenge him to a duel. Dori tries to distract Fritz by introducing him to his current girlfriend Mizi’s (Natalie Dormer) best friend, Christine (Kate Burdette). But Christine really falls in love with Fritz, and quite hard at that. During an evening of partying, the husband actually shows up at Fritz’ place.

Sweet Nothings is an excellent production. The cast is absolutely great. The stage design pretty minimalistic but very effective and I like the play. The only thing that went a little awry was the marketing.

END_OF_DOCUMENT_TOKEN_TO_BE_REPLACED

The best decison of your life
I’m in the happy position to have made a few good decisions. But the best was probably to come back to Vienna when I was 14.

The worst decision
I’m actually hard-pressed to answer that question… I mean, not that I haven’t made bad decisions, it’s just that none of them were “worst decisions.” Maybe my parents’ decision to move away from Vienna in the first place when I was 5. But then, that’s not really my decision.

How’d you like to die
Falling asleep and just not waking up anymore, when I’m very, very old.

If you could live forever, would you want to?
Totally. I never understood the angst that comes with immortality in most fiction. Life is so wondrous, people are amazing, there is always stuff that we can learn, new movies, books, plays and constant new, exciting discoveries. I would love to live forever.

Liebelei [German] is in turn translated with Flirtation, The Reckoning, Dalliance or Sweet Nothings, depending on the translation you read. It’s one of the earliest plays by Arthur Schnitzler.
[I read it because I saw a new adaptation, which I’ll review tomorrow.]

Plot:
End of the 19th, early 20th century, Vienna. Fritz and Theodor are best friends, both pretty wealthy but have a very different outlook on life, though both are ultimately jaded. While Dori doesn’t seem to take anything seriously, Fritz is in a rather destructive relationship with a married woman and fears that her husband found out about them and will challenge him to a duel. Dori tries to distract Fritz by introducing him to his current girlfriend Mizi’s best friend, Christine. But Christine really falls in love with Fritz, and quite hard at that. During an evening of partying, the husband actually shows up at Fritz’ place.

Liebelei is a very fluid, quick read and it’s an interesting look at the influence of personal and social moral on relationships. I had my problems relating to Fritz and Christine, but I quite liked Dori and Mizi. In any case, these are interesting, well-rounded characters in a play that asks interesting questions.

END_OF_DOCUMENT_TOKEN_TO_BE_REPLACED

Ludwig Hirsch [German] is an Austrian singer/song writer. He’s currently on tour with his band. He’s currently on his “Vielleicht – zum letzten Mal” [Maybe – for the last time] tour where he plays a bit of a best of his songs between 1980 and 2010. We saw him in the Konzerthaus.

I have to admit that I know only a small part of Hirsch’s songs. I know all the songs from his first album – Dunkelgraue Lieder – by heart, and then the odd one here and there. So I thought that a Best of tour would be the perfect choice. 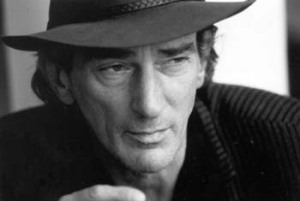