Plot:
Olive (Emma Stone) is a good student, though not a particularly popular one. But when a rumor is started that she sleeps around, it puts a quick end to her going unnoticed. Olive gets into a catfight with the religious do-gooder Marianne (Amanda Bynes), poses as a sex partner for various guys (who are gay or unpopular) and causes general mayhem at her school.

Easy A is a thoroughly enjoyable film. Though I expected a little more than it actually was, I had a good time watching and it makes for a nice evening’s entertainment.

END_OF_DOCUMENT_TOKEN_TO_BE_REPLACED

Pictures used: ad for a city festival, ad for the vienna film festival on Rathausplatz, Walking with Dinosaurs, How to Train Your Dragon, “Seltenheit” (contd) [means rarity]

[an “inside scoop” after the jump]

END_OF_DOCUMENT_TOKEN_TO_BE_REPLACED

Plot:
Elise (Angelina Jolie) is spied upon constantly, mostly by Inspector Acheson (Paul Bettany) because she was the lover of the mysterious Alexander Pierce, who stole quite a lot of money. When said Alexander gets a message to her that she should bord a train and pick somebody who looks remotely like him and make them believe it’s himself, Elise picks Frank (Johnny Depp), a math teacher who is trying to mend his broken heart in Italy. Hijinks ensue.

The Tourist falls surprisingly flat. It has a good cast and wonderful sets and a few good jokes. But it never picks up pace or draws you in. Also, it has plot holes the size of Alaska.

END_OF_DOCUMENT_TOKEN_TO_BE_REPLACED

Plot:
Megamind (Will Ferrell) gets sent away by his parents because his world is swallowed by a black hole*. At the same time but from another planet close-by, Metro Man (Brad Pitt) is sent on his way, too. They arrive on our earth and while Metro Man lands in a mansion, Megamind is dropped in a prison. So it’s no wonder that Megamind grows up to be a supervillain. But when he actually succeeds and kills Metro Man, he has to show what he’s really made of.

Megamind was mostly meh. It has some nice moments, it’s not badly done, but it left me cold. I even fell asleep for a few minutes in the middle**. 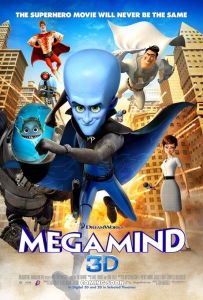 END_OF_DOCUMENT_TOKEN_TO_BE_REPLACED

There’s not much info here, but *drool*.

OH MY GOODNESS! Zhang Yimou and Christian Bale combined?!?!?!?!?!!! I won’t be able to stand all the pretty…

More info about this ^ here.

7 more seasons of Torchwood? I can live with that.

The greatest geeky knitting patterns. And might I add this?

Plot:
When Ted Crawford (Anthony Hopkins) discovers that his wife has an affair, he hatches a plan to kill her and immediately confesses to the murder. So, when young up-and-coming DA Willy Beachum (Ryan Gosling) gets this case as his last before starting at a prestigious law firm, he thinks that it will be a short one. But as soon as the trial starts, Beachum discovers that Crawford has been meticulous in his planning, and that his opponent is not as easy as he thought.

Fracture has all the rigt ingredients for an excellent thriller – good idea, awesome cast and an experienced director. But it falls a little short of the mark nevertheless.

END_OF_DOCUMENT_TOKEN_TO_BE_REPLACED

To understand what follows, a few preparatory remarks.

Maybe you’ve heard, Leonardo DiCaprio and Vladimir Putin joined hands in the fight for the Tiger. But before Leo could actually show up, his flight was delayed but he came anyway – which led Putin to call Leo “a real man.” Basically, it was already the stuff legends are made of.

I started talking with a few friends about it and suddenly – much like Brangelina – Leo Putin was born.

A few days later, the following exchange happened on twitter:

@kalafudra: Now it’s started. I’m actually looking up German translations for English words so I can write an article in German. O_o
@kathrintha: would you like to use this fully animated,interactive dictionary here?I’m on MSN,or here,or on the phone :)
@kalafudra: Since my focus is down the drain, I’m writing about five words an hour. Unless I pick up speed, I don’t think there’s much to do
@kathrintha: well…I should tell you that I have a bottle of wine next to me…so ask soon or ask tomorrow ^.~ #IdrinkthereforeIshallsleep
@kalafudra: Well, there’s always Leo…
@kathrintha: Of course…Leo Putin to the rescue!!!
@kalafudra: Exactly. First the tigers, then the kalafudras.
@kathrintha: That’s the natural order of things,I’m afraid.Shack up with Siegfried and Roy and you might jump the queue ^^
@kalafudra: I wonder what I would do chez S&R. Probably getting rid of tiger shit. Or something like that.
@kathrintha: sewing sequins on random items of clothing
@kalafudra: Oh, exactly my strong suit! I might even get to glitter stuff.
@kathrintha: definitely…all day long! glittery socks, undershirts, … you’d never run out of things to decorate.
@kalafudra: What a dream! Btw “to chant” in German?
@kathrintha: Buddhist? “chanten”, Church-style: “singen” (geht nicht besser…das Wort fehlt bei uns.)
@kathrintha: or football-fan-style? (“grölen”)
@kalafudra: somehow I only got 1 tweet, which probably should have been 2 (unless you just gave me one “or” option). I went with skandieren.
@kalafudra: Oh, suddenly tweet 2 is here. Anyway, meant more in “chanting someones name in an adoring, but slightly creepy way”
@kathrintha: yeah, then “skandieren” is probably the closest you’re going to get in German. wtf are you writing about?
@kalafudra: I’m writing my Firefly article for tomorrow. At the pace I’m going (and the vodka shots I’m doing), it’s gonna take me hours yet
@kathrintha: aaaah…good combination,though ^^
@kalafudra: Definitely. Though I’m still searching for the right soundtrack for that work. ;)
@kathrintha: “Knights of Cydonia”
@kalafudra: Oh, very nice. Very, very nice indeed. *ridesoffintothesunset*
@teashoe: May I just interject that I am highly entertained by your conversation? That is all.
@kalafudra: In that case, my work is done. ;)
@kathrintha: we aim to please ^^
@kalafudra: Though I now feel kinda obligated to be witty. And since I had my 7th Klopfer [a vodka based shot drink, ed.], this is not very likely.
@teashoe: Don’t feel pressured. It’s hard to top Leo Putin and sequins on underwear. ;)
@kalafudra: Since that’s all deadra’s wit, this really takes the pressure from me. ;)
@kathrintha: That sounds like it came from JK Rowling: “Leo Putin And The Underwear of Sequins”
@kalafudra: See? Case in point. *rofl*
@teashoe: lol If we keep going with this Leo Putin stuff, I might start shipping them… :P
@kalafudra: Especially since deadra already supplied you with the perfect title for the first fanfic.
@kathrintha: Okay,that would be so very, very wrong. Thanks for putting those pictures in my head when I’ve had a drink. You’re evil.
@kalafudra: I’ve already written half the fic in my head. If I finish my article sometime soon, I might actually start to write it
@teashoe: Oh god, now you did it. This has to be happening!! The world is in dire need of such a fic!
@kathrintha: I’m giggling about something involving Vladimir Putin IN BED. I feel dirty now.
@kalafudra: Well, that’s what friends are for: give you bad ideas and make you feel dirty.
@kathrintha: well,this was fun.Now I get to go to sleep with dirty images of Leo and Putin in my head. Good night,you!
@kalafudra: Sleep tight. And have nice dreams. *inserteyebrowwigglehere*
@teashoe: Well, have sweet dreams involving neither of them! (Okay, maybe Leo alone wouldn’t be too bad…)

I was fully prepared to make good on my promise when I got around to it. But along came this:

And I just knew I couldn’t wait till I had the time – I would make the time to write this fic and if everything else had to come to a complete standstill, it would.

So, here we are. If you brave the jump, you can read all about Leo Putin and the Underwear of Sequins. Including pictures.

And just to get the legal stuff out of the way: I’m not saying that anything of what I write below actually happened. Though Leonardo DiCaprio and Vladimir Putin are real persons, I don’t know squat about them or there personal life, but I’m reasonably sure that there is nothing to ‘ship there. Though a few incidents I refer to actually kinda happened, I’m taking huge poetic license. This is a work of fiction with a dash of satire and should be seen that way.

Also, the story is not really sexy [even I didn’t want to picture Putin getting it on (you’re welcome)], but it’s gay love. So if you have a problem with that, go somewhere else.

END_OF_DOCUMENT_TOKEN_TO_BE_REPLACED

So, deadra posted this (taken from here) and I thought I’d do my own take on it.

But since I’ve broken every record I ever had and have seen 148 movies in the cinema this year (and I will try to make it a full 150 till the end of the year) [obsessive? Who, me?], I find myself unable to answer with only one film each. So, you’ll get a few best of lists instead. (I’ll limit myself to ten, though. That’s pretty heroic in my book.)

Answers are in no particular order, but after the jump.

END_OF_DOCUMENT_TOKEN_TO_BE_REPLACED

[The second of the /slash Filmfestival Christmas Special movies.]

Plot:
When he’s 5, Billy (Jonathan Best) has one hell of a Christmas: first his otherwise catatonic grandfather (Will Hare) gives him a speech about Santa punishing naughty children. Then his parents get murdered in front of him by a guy in a Santa costume. This all leaves Billy severly traumatised (as you might imagine) and is not made better by the treatment he receives in the orphanage he’s subsequently sent to.
Ten years later Billy (Robert Brian Wilson) is working in a toy store on Christmas when Santa falls in and he is asked to replace him. But donning that Santa costume is too much – and Billy snaps.

Silent Night, Deadly Night is every stereotype of bad 80s horror movies combined – the ridiculous backstory, the nudity for no particular reason, the ending which already lays everything down for a sequel, the mediocre, over-the-top-performances. And even though all of this should make it a trite affair, the movie is immensly entertaining.