Most people complain about the fact that basically everything Ripley fought for in Aliens, is obliterated by the beginning of Alien³. I can understand those complaints, but that didn’t bother me so much. The way I see it: Ripley still did everything she could to save them and Newt and Hicks not surviving doesn’t change the fact that she did save them for a while.

And at least they tried not to have the same plot again we had already seen twice. And the prison culture they introduced us to was pretty interesting – it just felt entirely out of place. Their philosophy and the struggle with the Alien just wouldn’t come together to form a cohesive whole.

The things they could have made so much out of was Ripley’s [SPOILER] “pregnancy” with the queen [/SPOILER] and her relationship with Bishop (or what remains of him) and the AI in general. Instead both topics are introduced too late into the film and are too quickly abandoned in favor of (not very good) action scenes.

And that’s when the film just becomes boring. The action scenes don’t work, the prisoners remain completely interchangeable (with the exceptions of Clemens and Dillon) and you just don’t give a damn about any of it. 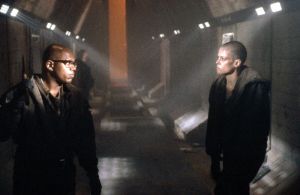 Summarising: Not a really good addition to the franchise.