We took a really early flight on Thursday which meant getting up around four am. And since we took a rather roundabout way of getting from the airport in Berlin to my aunt’s apartment where we were staying, our trip took pretty long. So the first thing we did was take a nap. Ah, holidays!

After the nap, we headed to the Hackesche Höfe for a little bit of looking at beautiful things that are unfortunately too expensive for my budget. Then we went to my sister’s for a (fantastic) dinner.

On Friday, we had an extensive breakfast at this incredibly cute café close to my aunt’s place. Good breakfast with huge helpings and at a good price. (Food is so much cheaper in Berlin than it is in Vienna, it is mindblowingly unfair.) 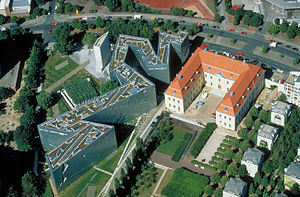 Afterwards we headed to the Jewish Museum which had always been on my list on my previous Berlin trips but I never made it there. Until this time. And the architecture of it really is amazing. Especially the floor below ground. Unfortunately the so-called “Garden of Exile” was closed when we were there, but only looking at it already made me dizzy, so I’m pretty sure that walking through it would be pretty incredible as well. And the “Memory Void” was amazing as well.
The thing is, though, that the part below ground level was already so much and so intense, that I practically couldn’t take the rest in anymore: the much bigger part of the museum deals with the Jewish history in Germany, starting in the Middle Ages. Practically all I took away from there was a section about the life of medieval Jewish women, through the diaries of Glückel of Hameln. That was fascinating.

After a coffee and brain recuperating break, we headed to another museum, the Berlinische Galerie. They had an exhibition there called The Shuttered Society, about art photography in Eastern Germany from 1949-1989. I actually didn’t expect much of this exhibition. My dad was the one who really wanted to see it. But as soon as we came in, we landed in a small cinema where they showed three documentaries, two short ones (about Arno Fischer and Gundula Schulze Eldowy, respectively) and a third long one, Ostfotografinnen by Pamela Meyer-Arndt about Gundula Schulze Eldowy, Sibylle Bergemann and Helga Paris. And especially this last movie was fascinating. Interviews with three very different women who worked very differently, but at the same time and in the same place and with the same perception of dissidence about them.
The exhibition after the film was interesting, too. I especially liked the pieces by Christian Borchert, Micha Brendel, Lutz Dammbeck, Edmund Kesting, Matthias Leupold, Ulrich Lindner, Sven Marquardt, Florian Merkel, Richard Petersen, Evelyn Richter and the aforementioned Gundula Schulze Eldowy.

Christian Borchert did a series of family portraits, always giving the parents’ jobs as info about them. This one is Family W. (Police man, assembler).

After the museum, we had dinner and then went to the cinema in the Sony Center (which is still one of my favorite buildings in the whole wide world). And the cinema there is a huge original version cinema. Can we just transplant the whole thing to Vienna, as is? Anyway, we saw Silver Linings Playbook, which I’ll review tomorrow.

On Saturday, we had another museum tour ahead of us. We started with the Pergamon Museum. I was there already when I was in Berlin for the first time, but it was great to get back to it. The Pergamon Altar is an amazing piece of architecture and one that can be discovered over and over again.
The Market Gate of Miletus and the Ishtar Gate are equally impressive, but it’s the Altar that I’m in love with. Though there were some really nice sphinxes and lion sculptures in the Near Eastern part of the museum that I liked a lot, too.
Admittedly my brain was too fried after that to even have a look at the Islamic Part of the museum (which is exactly the same thing that happened the last time I was there), but that just means that I will have to go back there the next time I’m in Berlin as well.

The we took a lunch break at this Asian restaurant which was a little more expensive than the usual Berlin restaurant but that also had the best green tea I have ever tasted. I swear. I even mentioned this to the manager there and I think I totally made his day with that remark because he spent the next five minutes explaining how they go to Tea Mountain every year to choose the best tea that year, since the taste of the tea, much like wine, depends on the vintage. And I can honestly say: that effort totally pays off.

After lunch, a little walk and some coffee, we headed to the Neues Museum. I have to admit that Ancient Egypt is not exactly my area of interest and the fourth museum in two days is pretty much overkill, but my mom wanted to see the bust of Nefertiti and anyway, it’s not like I’m not interested in it at all.
It did mean, though, that I wasn’t particularly patient and after an hour and a half of ancient artefacts and looking for the bust (which is surprisingly well-hidden), my mom and me gave up and headed for coffee. My dad showed more stamina and managed to cram in another hour almost of culture.

After that museum tour de force, we were all pretty much tilt. So we met my sister and my niece and just had a comfortable dinner before going to bed.

And the next morning we left pretty early, so that was that trip. Next time, I think less museums or more days would be a good idea.