Plot:
Derek (Derek Lee) and Clif (Clif Prowse) are going on a world trip, a lifelong dream of Derek’s that Clif decided to document via video diary. They start in Barcelona and move on to Paris. In Paris, Derek meets Audrey (Baya Rehaz) but after they go back to Derek’s hotel room, Clif finds Derek bleeding in his bed and Audrey is gone. After that Derek changes. At first he shows superhuman strength but things quickly turn really bad.

Afflicted has a good set-up but stopped working for me after about 30 minutes, only partly because of the found footage format. It just became too repetitive. 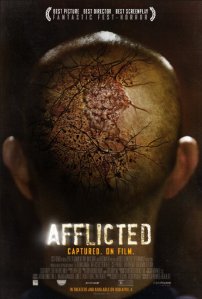 A good found-footage flick is hard to do because, especially towards the end, it is hard to believe why people will keep filming the most horrendous things. Afflicted suffers from the same problem with the additional problem of it being a vlog. Why would you put a video of your best friend online, showing how he lies bleeding in a bed or how he seriously assaults people? And the explanation for the livestream towards the end was tenuous at best.

Another problem I had with the film was that there were too many jumpscares that worked practically only because it suddenly got really loud. Scares like that have nothing to do with tension or atmosphere, they produce a purely physical reaction and it gets tedious. 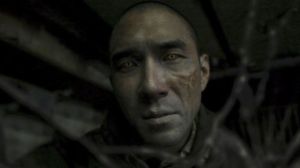 The film started to fall apart for me after [SPOILER] Derek kills Clif. Without their dynamic and their friendship, the movie felt a little hollow [/SPOILER]. But even before that I had problems with suspending my disbelief. The way Clif jumps to vampirism felt way too fast for me. I mean, they’re starting from a completely realistic place. Is vampirism really your first conclusion? [That he starts citing vampire rules there that never actually matter in the film was also strange.] The reason for Derek’s refusal to see a doctor was stretching things, too.

The special effects were good and I liked both Derek and Clif. But it was all hung from such an unstable framework that nothing solid could come out of it. 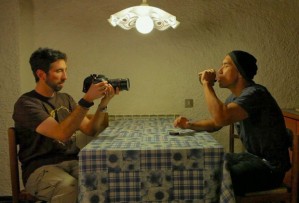