Plot:
Julia (Jessica Lowndes) is a reporter who dreams of getting to write a big story. When her sister and her family is killed, her reporterly instincts kick in and she starts to investigate why a stranger with no connection to her family and apparently deeply regretful about his actions would take her entire family from her. With the help of her ex-boyfriend Declan (Joe Anderson), a police officer, Julia takes up a trail of mysteries that is connected to Jebediah Crone (Daytone Callie).

Abattoir works from an interesting idea and with strong visuals, but unfortunately the clichéd characters do take away some of the enjoyment. Still, it’s an interesting addition to horror movie lore.

END_OF_DOCUMENT_TOKEN_TO_BE_REPLACED

Plot:
Eli (Michael Patrick Nicholson) has hit rock bottom. Within only just a few hours, he finds himself homeless, jobless and dumped. It’s the perfect time for a fresh start then. And that’s when he meets Anya (Chelsea Lopez) through her boyfriend Kyle (Michael Godere). Eli finds himself drawn to her and his attraction seems to be reciprocated, but it’s only when they discover that they both like to eat their hair, when they really fall for each other. But it only takes a few days for things to spiral out of control.

Are We Not Cats did not work for me at all. The pacing was off and the ending pushed the film from slightly boring, but not uninteresting to absolutely ridiculous in no time at all. 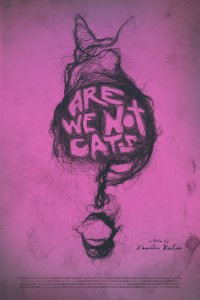 END_OF_DOCUMENT_TOKEN_TO_BE_REPLACED

Plot:
Hank (Paul Dano) is stranded on a deserted island. His only company is Manny (Daniel Radcliffe). It’s just that Manny is actually dead. But he is still able to speak and his body has some absolutely perfect properties for Hank’s escape. So the two of them make their way back home. And the longer they travel together, the more they discover about each other.

It’s hard to put into words how strange Swiss Army Man actually is and how much that strangeness benefits it without it being a gimmick. Much too often, the strangeness of a film feels like posturing, here it is an absolutely central part of the film’s heart and soul – and it’s got a lot of those, transforming Swiss Army Man into a magical experience that is bound to make you emotional. 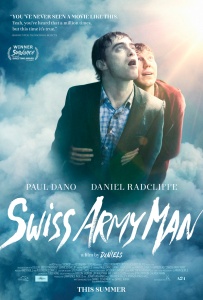 END_OF_DOCUMENT_TOKEN_TO_BE_REPLACED

Plot:
After a fresh start in a new town, Elaine (Samantha Robinson) is looking for love. And she’s not above using her magic trying to find it. Her love potions do work, but maybe a little too strongly and men die. And then Detective Griff (Gian Keys) starts to investigate Elaine. And Detective Griff might just be the perfect guy Elaine has been waiting for.

The Love Witch is not only a film that looks great and perfectly emulates 60s to 70s aesthetics, it’s also an extremely fascinating take on feminist discourse. I absolutely loved it.

END_OF_DOCUMENT_TOKEN_TO_BE_REPLACED

Plot:
A man (Emmanuel Garijo) is shipwrecked and only barely makes it to land on a deserted island. He is a survivor and immediately starts with preparing a raft to leave the island. But a giant red turtle patrols the sea and destroys it. And the raft after that. And the raft after that. But when the turtle comes ashore, the man has his chance for revenge. But are they actually enemies?

La tortue rouge is a gorgeous film with a story that raised my eyebrow(s) more than once as I couldn’t really turn off my head to enjoy the film as would have probably been advisable. But I still liked it.

END_OF_DOCUMENT_TOKEN_TO_BE_REPLACED

Plot:
Young-shin (So-dam Park) was hit by a car in a hit-and-run accident. But maybe that’s not the only thing that’s wrong with her – she seems to be possessed by a demon. So Father Kim (Yun-seok Kim) and Deacon Choi (Dong-won Gang) start to investigate her case to see if its a human or a supernatural issue. But Choi is also supposed to keep an eye on Kim who has drawn suspicion in the church. And Choi does have his own demons to battle as well.

While I liked the idea of a Korean catholic exorcism film, I can’t say that The Priests managed to convince me. There was simply too much that didn’t work for me (and the program that showed it at around 3am didn’t do it any favors, either).

END_OF_DOCUMENT_TOKEN_TO_BE_REPLACED

Plot:
Jebediah Woodley (Dolph Lundgren) is a demon hunter. The best demon hunter. So when a demon hits the small Mississippi town of Chicory Creek, Jebediah is there to take care of it. Also there is FBI agent Evelyn Pierce (Kristina Klebe) who came to investigate the series of murder that the demon caused. While they both have their doubts about the work of the other, it doesn’t take long until they’re forced to team up.

Don’t Kill It knows exactly what it is and what it has to offer – and that is the perfect B-movie experience. So they throw all their weight into presenting the best piece of trash they could possibly offer – and it’s glorious.

END_OF_DOCUMENT_TOKEN_TO_BE_REPLACED

Plot:
Ronnie (Michael St. Michaels) and his son Brayden (Sky Elobar) give 70s-Disco-themed city tours together. They also live together and generally spend most of their time together. They are rather settled in their lives, but things do get shaken up a bit, when oiled up serial killer The Greasy Strangler starts to haunt their city. Around the same time Janet (Elizabeth De Razzo) takes their tour and Brayden quickly falls for her. But Ronnie may be interested as well.

The Greasy Strangler is a weird animal of a film. I could go along with some of its weirdness, but definitely not with all of it. Altogether I wasn’t particularly taken with it. 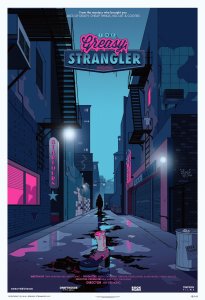 END_OF_DOCUMENT_TOKEN_TO_BE_REPLACED

Plot:
Melanie (Sennia Nanua) has a very regular life. She gets up in the morning, gets dressed, sits herself down in her chair and waits to be strapped down by the soldiers lead by Sergeant Parks (Paddy Considine). When her legs, arms and head are secure, she is rolled to class together with the other children. Her favorite teacher is Miss Justineau (Gemma Arterton) who sometimes tells them stories. But her routine is destroyed when she is first carted off by Dr. Caldwell (Glenn Close) who wants to perform some kind of surgery on her – and then the military base she lives at is overrun by hungries. And suddenly Melanie finds her life turned upside down – and she has to learn the truth about her world and herself.

After having read the novel, I expected many things of The Girl with All the Gifts and I’m glad to say that it absolutely delivered. It’s a fantastic film. 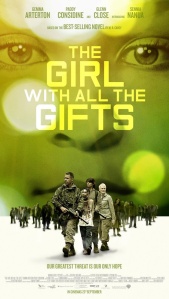