Plot:
The coast guard inspects an abandoned yacht just outside Tokyo when they are attacked by something. Viral footage of the incident quickly makes the rounds and reaches Deputy Chief Cabinet Secretary Rando Yaguchi (Hiroki Hasegawa). As the cabinet tries to figure out what exactly happened and what next steps are necessary, Yaguchi puts forward the theory that it looks like an animal attack. When he is proven right – there is an massive animal wreaking havoc and that makes its way onto land, where it evolves -, Yaguchi is tasked with figuring out this creature.

Shin Godzilla brings a couple of (to me) fresh ideas to the kaiju movie genre, but it still didn’t manage to win my kaiju-averse heart over. 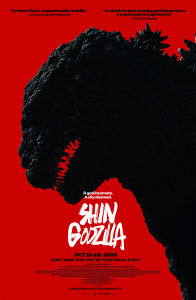 I don’t know why I don’t connect with kaiju films. I’ve seen my fair share by now and have yet to see one that I love. In fact, I’d be hardpressed to point one out that I actually liked. So I’m really not the core audience for Shin Godzilla. That being said, there were a couple of things I did like about it: that they turned it into a story of bureaucracy and governance was an excellent touch. And I liked the general idea that the creature iteself keeps evolving.

Unfortunately, the novelty of those ideas quickly wore off and I started to get very much bored by the film. There is only so many times you can watch the same sequence of events and Shin Godzilla repeated itself too much without adding more things of interest to the mix.

In the end my take-away was that I saw yet another kaiju film that didn’t work for me. Maybe I should stop trying.