Plot:
After 12 years in prison for muder, Ulrik (Stellan Skarsgard) is finally released. Unsure of what to do with himself, he just falls into his old habits and does what local crime boss Rune Jensen (Bjørn Floberg) tells him to do. Which at first is live in Rune’s sister Karen Margrethe’s (Jorun Kjellsby) basement and work in Sven’s (Bjørn Sundquist) garage. This suits Ulrik just fine, who is much less interested in restarting a life of crime than reconnecting with his estranged son Geir (Jan Gunnar Røise). But things don’t really go as planned.

A Somewhat Gentle Man is a very Scandinavian film. It’s nice, calm, has a dark sense of humor and is most of all populated with real people. If you like that, you’re going to love this film. 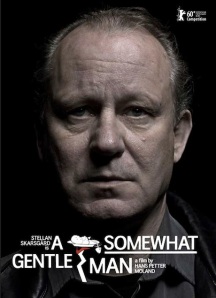