The Truth is a Discworld novel by Terry Pratchett. Though standalone, it’s connected to Monstrous Regiment and the City Watch books. [My reviews of the other Discworld books here.]

Plot:
William de Worde makes his living as a kind of news service. He gathers rumours and news around town, compiles a letter once a month which he then tries to sell to as many subscribers (mostly nobility or higher ranking people out of town) as he can. One day he stumbles upon a new dwarf invention – a press with movable type. More or less against his will he is pulled into business with the dwarves and into a msysterious attack the Patrician is said to have committed. And basically before he knows what has happened, William has founded the first Newspaper in the Discworld.

The Truth was really enjoyable. Though probably not the best Discworld novel ever, I had fun reading it, and as the other books, it’s a quick read with loads of ideas (enough for approximately 20 books).

END_OF_DOCUMENT_TOKEN_TO_BE_REPLACED

Moving Pictures is one of the stand-alone Discworld novels by Terry Pratchett [reviews of the others here].

Plot:
Something gets uncovered in Holy Wood, a small wood near Ankh-Morpork. And next thing you know, alchemist have found a way to make moving pictures (or clicks) and Holy Wood is home to an assorted group of people who don’t really quite know why they’re there making clicks, but know that they really have to. Among them is Victor Tugelbend (Unseen University drop-out/actor), Cut-Me-Own-Throat Dibbler (Opportunist/Producer) and Gaspode (talking dog). And this wouldn’t be the Discworld if things were as easy as they seem on the first look.

I adored Moving Pictures. It had me laughing out loud basically all the time. I know I’ve said that I like Pratchett at his darkest, but damn it, I like it when he’s this light-hearted, too. [Maybe the combination Watch and light-heartedness is what doesn’t work so well for me.] 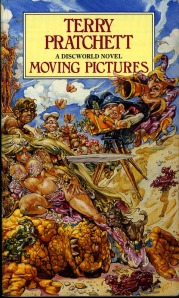 END_OF_DOCUMENT_TOKEN_TO_BE_REPLACED

Night Watch is the sixth of the Discworld novels about the City Watch (if you don’t count The Truth which is less about the Watch and more about de Worde. [I’m currently reading it.] If you want to count The Truth, it would be the sixth book and Night Watch the seventh) by Terry Pratchett [reviews of the others here].

Plot:
During the pursuit of a criminal, Sam Vimes (and said criminal, Carcer Dun) gets swept into a magical storm which sends him back 30 years. In the past, he takes on the role of John Keel, his own mentor and has to orchestrate a revolution and try to get Carcer Dun and himself home.

Night Watch is very different in tone from the City Watch books before it – it is much darker and less funny (though there’s still plenty to chuckle about). Inicidentally, it’s also the City Watch book I like most so far. I like Pratchett when he’s darker. 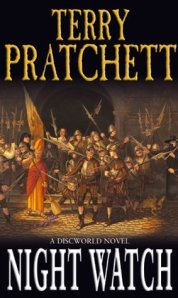 END_OF_DOCUMENT_TOKEN_TO_BE_REPLACED

The Fifth Elephant is the fifth of the Discworld novels about the City Watch by Terry Pratchett [reviews of the others here].

Plot:
Sam Vimes gets send to Überwald on a diplomatic mission by the Patrician. Überwald is the home of the dwarfs, the vampires and the werewolves. Things are brewing in Überwald – a new dwarf Low King is about to be throned, the werewolves are planning something and Angua and Carrot get mixed up in all of this as well.

I liked the Fifth Elephant – Sam Vimes as a diplomat is always an awesome sight. Though I don’t think that it’s the best book in the series, it’s not the worst either. Getting a look at society in Überwald was also really cool.

END_OF_DOCUMENT_TOKEN_TO_BE_REPLACED

Jingo is the fourth of the Discworld novels about the City Watch by Terry Pratchett [reviews of the others here].

Plot:
An island suddenly appears right between Ankh-Morpork and Klatch and triggers territorial disputes. When an attack on the Klatchian Prince happens in Ankh-Morpork, people prepare for war. Sam Vimes gets somehow stuck in the middle of all this and then has to go to Klatch himself because Angua has been kidnapped.

I just wrote that I didn’t love Jingo as much as the other novels about the Watch. Then I though about everything I did like about it and I immediately got a bad conscience and had to delete what I had written. Maybe I didn’t like the overall story, but there was enough awesome in here to fill several books. 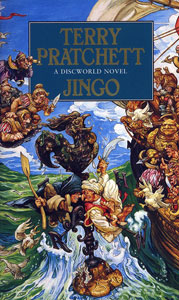 END_OF_DOCUMENT_TOKEN_TO_BE_REPLACED

Feet of Clay is the third of the Discworld novels about the City Watch by Terry Pratchett [reviews of the others here].

Plot:
Somebody is committing murders in Ankh-Morpork, and whoever it is, they leave behind a strange mud trail which soon leads to the golems of the city. At the same time, the Patrician is being poisoned and Nobby Nobbs is discovered to be a noble man. So Sam Vimes has is hands full once more.

Feet of Clay was definitely my favourite Discworld novel (until I reached Night Watch. But more on that later). I loved Dorfl, and I loved the way Carrot and Angua are developing and, of course, Sam Vimes and Cheery Littlebottom and the Patrician. So, in short: the characters. 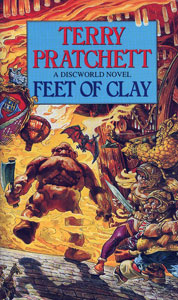 END_OF_DOCUMENT_TOKEN_TO_BE_REPLACED

Men at Arms is a Discworld novel by Terry Pratchett, the second to feature the City Watch. [Here are my other reviews of the Discworld books I’ve read so far.]

Plot:
Ankh-Morpork’s City Watch faces an equal opportunity employment programme and has to deal with new recruits, among them dwarfs, trolls and werewolves. As if that wasn’t enough Captain Vimes is about to get married to Sybil Ramkin, richest woman in the city. And somebody stole a mysterious object from the Assassin’s Guild. Oh, and there are quite a few seemingly unconnected murders to solve.
At the same time, Edward d’Eath, discredited assassin, is convinced to be able to solve all of Ankh-Morpork’s problems by reinstating the king, whose heir just happens to be in the city. At least according to Edward.

I have to admit that I read this book 3 months ago and I’m already fuzzy on the details. I know I liked it, though it’s probably my least favourite Watch novel so far (I’ve arrived at the Fifth Elephant in the meantime). And I still know the general whereabouts of the plot. But that’s about it. 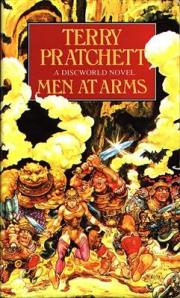 END_OF_DOCUMENT_TOKEN_TO_BE_REPLACED

Guards! Guards! is one of Terry Pratchett‘s Discworld novels and the first to deal with the City Watch.
[Yeah, I know I said I was gonna continue with Mort, but it seems to be the only Discworld book that deadra doesn’t own, so Death will have to wait… :)]

Plot:
A secret brotherhood, the Unique and Supreme Lodge of the Elucidated Brethren of the Ebon Night [not to be confused with other Brethrens] hatch out a plan to overthrow Lord Vetinari: They want to conjure up a dragon, let it be killed by a hero, who will then go on to be their puppet king.
Unluckily for them, Captain Sam Vimes of the Night Watch chooses exactly this moment to stop drinking and start using his brain.

Guards! Guards! was much more like I imagined a Discworld novel than The Colour of Magic. I laughed and I thoroughly enjoyed myself. While I’m still no die-hard fan of the books, I understand the euphoria better now and I’ll definitely will go on reading (you hear, deadra? Please bring me Men At Arms the next time we’ll see each other! And if you bought it in the meantime, you can also bring me Mort. Thanks). 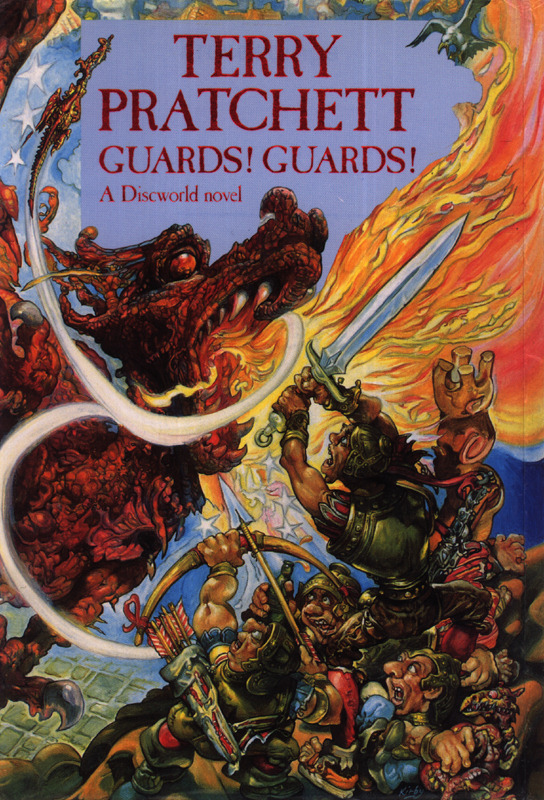 END_OF_DOCUMENT_TOKEN_TO_BE_REPLACED

Knowledge = power = energy = matter = mass; a good bookshop is just a genteel Black Hole that knows how to read.

The Colour of Magic is the first of the Discworld novels by Terry Pratchett. It was also my starting point for the series. It is shocking, I know, but I’ve never read anything of this series before.

Well, that’s not entirely true. I started reading The Colour of Magic about 10 years ago and found it immensly boring, so I didn’t finish it (I think I got to page 15 or so). But deadra kept reading hilarious excerpts from (other) Discworld novels to me, so I figured I’d give it another shot. And because I have to start a series with the first book, I started with The Colour of Magic again.

The story goes like this: Twoflower is the first tourist ever to come to Ankh-Morpork from the Counterweight continent, his only companion a magic chest made from sapient pearwood, which follows him everywhere he goes and fiercly protects Twoflower. Twoflower is pretty naive and to protect him, Rincewind gets recruited as his tour guide. Against his will. Rincewind is a pretty crappy magician, but through an accident, one of the great eight spells got lodged into his brain. And now it wants to say itself at the most inconvenient moments. But because no one knows what it does exactly, it’s probably not a good idea to do so. Well, Twoflower and Rincewind get entangled in a series of adventures, which are more or less unconnected.

I have to admit, I was a bit disappointed. It wasn’t half as funny as I thought it would be [the TV adaptation on the other hand, is. Even though I always had to remind myself that Sean Astin is actually a normal sized man (more or less) and not hobbit sized. It surprised me every time he got up].

Back to the book. It wasn’t bad and I enjoyed reading it, but I just expected it to be laugh-out-loud funny. And it wasn’t. Expectations can really screw you. I mean, the backstories were great, but the action itself were just average.

Well. I’m pretty sure that the other books are funnier and I do think I will continue to read them. But I think, I’ll follow Death first. Thanks to the great Discworld Reading Order Guide (pdf), I know where I want to go next… and I can always return to Rincewind later on.