Plot:
Steve (Kristopher Turner) is about to get married to Tina (Crystal Lowe). Unfortunately Tina and Steve’s sister Sarah (Kristen Hager) don’t get along at all – which Steve tries to remedy by taking them, including Sarah’s husband and Steve’s best friend Craig (Shawn Roberts) to the family cabin. But things go from bad to worse when Steve is bitten by a zombie mosquito and slowly starts craving brains and transforming in general.

A Little Bit Zombie has its moments, but mostly it has a rather shallow and cheap sense of humor. But worse than that, the direction was really, really bad. And I mean fucking abysmal. 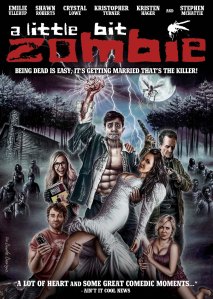