END_OF_DOCUMENT_TOKEN_TO_BE_REPLACED

Plot:
Jason Tantra (Alain Chabat) wants to shoot a film, while working as a camera man on a cooking show with a host in a rat costume, Dennis (Jon Heder), who constantly complains about skin rash. Nevertheless Tantra thinks he is the ideal protagonist. The producer Bob Marshall (Jonathan Lambert) is interested in Tantra’s project, but he has one condition before he really puts his support into it: Tantra has 48 hours to find the perfect groan of pain to really sell the film. In the meantime, Reality (Kyla Kenedy) and her father (Matt Battaglia) shoot a hog on the inside of which, Reality finds a videotape. But maybe Reality is just the protagonist of Bob’s other movie venture, which is directed by the eccentric Zog (John Glover). And maybe her school director Henri’s (Eric Wareheim) dream of moving through town in women’s clothes isn’t actually a dream, explaining why Reality would see him. But if Reality and Henri are characters in Zog’s film, how can Henri be in therapy with Tantra’s wife Alice (Élodie Bouchez)?

So far I liked all Dupieux films I’ve seen, although Wrong Cops left an increasingly sour aftertaste and all of them had some part I found a little problematic. With Réalité that problematic bit was missing. Instead it was a glorious exercise in meta level fuckery. 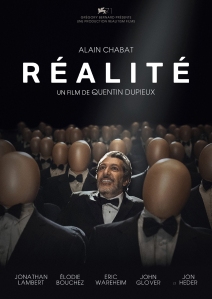