Plot:
It is the beginning of the 20th century and the still rather new abolishment of slavery tempts the Peazant family to leave the islands they have been living on and to attempt their luck on the USAmerican mainland. The islands and their isolation gave them the possibility to preserve some of their African ancestral traditions – the Gullah culture. So not everybody is willing to actually leave, while others can hardly wait. In any case, it’s time to make decisions.

Daughters of the Dust is an in the best sense unusual film in many ways. It is absolutely stunning in so many ways. It’s a film you should definitely watch – and then re-watch. 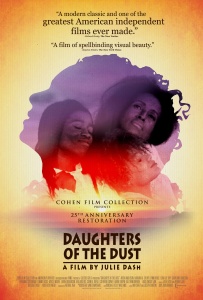