American Gods is a novel by Neil Gaiman. I re-read it for One Book, One Twitter, which is still going on, I just finished early. [Here are my reviews of other Neil Gaiman books.]

Plot:
Shadow has spent the last three years in prison and is about to get out when he gets the news that his wife died in a car crash. Devastated, he gets released early and makes his way home to the funeral. Before he arrives there, though, he meets the mysterious Mr Wednesday who is more than he seems to be. Wednesday hires Shadow and Shadow gets drawn into things that are way bigger than he is. Even though he’s a big guy.

American Gods is a Love-it-or-hate-it book. Deadra, who is a huge Neil Gaiman fan, couldn’t finish it. I devoured it for the second time already. And I still love it. Shadow is a great character, the story is interesting and I love the inclusion of all kinds of mythologies and the small stories that are told throughout the book. 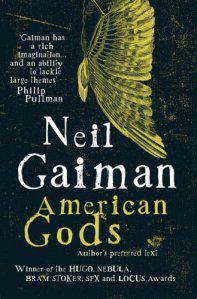 END_OF_DOCUMENT_TOKEN_TO_BE_REPLACED

Serving dishes were placed on the table. Each of the diners were given a small painted tray on which was some tarnished cutlery, to place on his or her lap.

Admittedly, one of the less exciting passages.

Anyway, I decided to join the whole 1 Book, 1 Twitter thing, mostly because I’ve been meaning to re-read American Gods for a while now. It’s still really awesome.

Neil Gaiman gives us American Gods – as a free e-book. If you haven’t read it already, you should do so – it’s great. You can find the link here. It’s online for a month.