Plot:
When King Uther (Eric Bana) is betrayed by his brother Vortigern (Jude Law), Uther barely manages to get his baby out of the danger zone. The baby grows up to be Arthur (Charlie Hunnam) who has no idea of his family background, but gets a whole lot of street smarts. And then Uther’s sword is uncovered, stuck in a stone. Since it can only be removed by Uther’s son and nobody knows where he is, Vortigern forces all men in the country to give it a try. And nobody is more surprised than Arthur when he is actually able to pull the sword out – a fact that immediately pits him against Vortigern and the powers he commands.

I expected King Arthur to be pretty bad and it was, but it was also a little better than expected. Which is not to say that it’s actually a good film or really worth seeing. 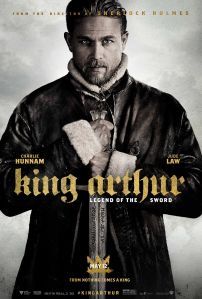 END_OF_DOCUMENT_TOKEN_TO_BE_REPLACED

Plot:
Captain Jack Sparrow (Johnny Depp) arrives in England only to find out that he’s apparently been recruiting sailors. He quickly finds that Angelica (Penélope Cruz), who he has met in the past, has been posing as himself to find sailors for the Queen Anne’s Revenge, Blackbeard’s (Ian McShane) ship. They are trying to find the Fountain of Youth. Against his will, Sparrow ends up on the mission, followed by Barbossa (Geoffrey Rush), who was sent by the English king to find the Fountain himself but who also still has an open tab with Blackbeard.

I thought Pirates of the Caribbean was really a lot of fun. It’s pretty mindless, doesn’t make much sense when you think about it and the 3D really sucked, but it still ended up very entertaining.