Plot:
Richie Lanz (Bill Murray) is a tour manager who has seen his heyday. Now he only has a handful of unknown acts, the most promising of which is probably Ronnie (Zooey Deschanel). When Richie hears about the tours for soldiers stationed in Afghanistan and what people get paid for those tours, he’s determined to get Ronnie there, despite whatever protests she might utter. She can be convinced but once they land in Kabul, she loses her nerve and takes off with the help of mercenary Bombay Brian (Bruce Willis). As luck will have it, though, Richie stumbles upon fresh new talent in the form of Salima (Leem Lubany). He is determined to get her to the TV show Afghan Star. Only problem is: Pashtun women are not allowed to sing and perform in Afghanistan.

Well. Rock the Kasbah is certainly a film. But it’s a film without direction or much thought or much to recommend it, really. 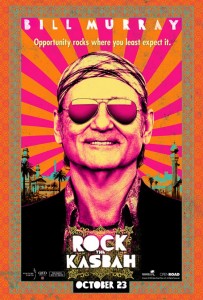