Plot:
Agatha (Mia Wasikowska) just arrived in Hollywood and is chauffeured around by Jerome (Robert Pattinson). But it quickly becomes clear that it isn’t her first time in the city, even if she hasn’t been in a while. She gets a job as an assistant to ageing actress Havana (Julianne Moore) who is obsessed with her mother (Sarah Gadon), also an actress who died at a very young age. For that she is in therapy with Stafford Weiss (John Cusack) whose unconventional methods are also selling pretty well as books. Stafford’s son Benjie (Evan Bird) is a child actor himself and has just been released from rehab, despite being only 13 years old. Now he and his mother Cristina (Olivia Williams) try everything to get his career back on track. But things in Hollywood are treacherous indeed.

Maps to the Stars was an interesting look at Hollywood with a stellar cast. It does make me wonder how much of it is actually realistic (since it is touted as such an honest look at Hollywood) but pushing that aside, it is definitely a smart, engaging film. 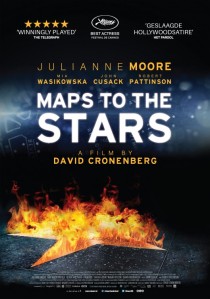