Plot:
Damiel (Bruno Ganz) and Cassiel (Otto Sander) are two angels, tasked with watching over the people of West Berlin. They walk through the city and try their best to bring comfort, relief and general goodness, but aren’t always successful. Damiel increasingly feels that he doesn’t want to do it anymore in any case and when he sees Marion (Solveig Dommartin), the trapeze artist of a struggling circus, his attraction to her is the final push he needs to make it official: he wants to live as a human with all the emotion that brings with it and that are not accessible to him now.

Der Himmel über Berlin was recently restaurated and got to tour cinemas again. Given that the best thing about it is the spectacular cinematography, it was very nice to be able to see it on the big screen. Other than that, it didn’t entirely work for me, but it’s definitely interesting.

END_OF_DOCUMENT_TOKEN_TO_BE_REPLACED

Plot:
Zev Guttman (Christopher Plummer) only barely survived World War 2 in Auschwitz. The rest of his family did not. Now living in the USA, he is old and dementia is slowly grabbing ahold of him. After his wife dies, he finds that the time is finally right to go on a mission and bring down one of the SS officers in Auschwitz who is still at large. Together with his friend Max Rosenbaum (Martin Landau), Zev has narrowed it down to five people the guard could have assumed the identity of. So Zev flees from the senior residence with a bit of money, a detailed letter that explains everything and a gun, hoping to achieve his goal before his dementia will take him over entirely.

Remember takes you on a slow, painful journey and ends with a kick in the gutts. And in this case, all of those things are really good, although afterwards you’ll probably want a stiff drink.

END_OF_DOCUMENT_TOKEN_TO_BE_REPLACED

Plot:
The Counselor (Michael Fassbender) is a lawyer who is about to marry his girlfriend Laura (Penélope Cruz). He is also somehow involved in the drug business through his client Reiner (Javier Bardem) and he’s about to get involved more deeply. And to no one’s surprise except his own, things go very wrong very quickly and it’s all somehow connected to Reiner’s enigmatic girlfriend Malkina (Cameron Diaz).

There were many things I could see going wrong with this film, but what I did not anticipate was that it would be Cormac McCarthy’s writing where things go very wrong. But unfortunately that was the case and the result was a film that was pretty much unbearable.

END_OF_DOCUMENT_TOKEN_TO_BE_REPLACED

Plot:
Michael Kohlhaas (Mads Mikkelsen) trades with horses. To reach the market he has to cross the lands of a young nobleman who doesn’t want to let him pass without a special document. Michael leaves him two horses as collateral and promises to return with it. But it turns out that there is no law that demands such a document and when Michael returns, it is to find his horses in a woeful state. He asks for justice in a legal manner, but all his requests are turned down and the repercussions are great. So he takes the law into his own hands.

Michael Kohlhaas is a slow film. Most of the time that makes it extremely atmospheric and gives the cast room to work, sometimes it means that it drags on a bit. But it is very worth watching.

END_OF_DOCUMENT_TOKEN_TO_BE_REPLACED

Plot:
Raimund (Jeremy Irons) is a teacher who leads a rather lonely life. But it takes a sudden turn, when he keeps a young woman from comitting suicide who leaves her coat with him. Inside that coat he finds a book and train tickets to Lisbon. The book resonates with him, so on a whim he boards the train to find the author of the book. But instead of finding the author, he finds a whole story of love and betrayal during António de Oliveira Salazar‘s dictatorship.

There is only word I can use to describe Night Train to Lisbon: boring. It was so boring, I fell asleep for half an hour during the film. And despite cutting the movie short that way, it was still way too long. 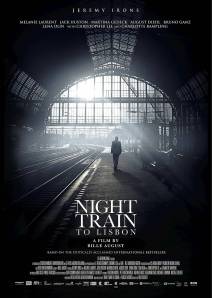 END_OF_DOCUMENT_TOKEN_TO_BE_REPLACED

Plot:
Martin Harris (Liam Neeson) travels with his wife Elizabeth (January Jones) to Germany to attend a conference. While Elizabeth checks into the hotel, Martin ends up in a car accident. Cab driver Gina (Diane Kruger) saves his life, but Martin ends up in the hospital in a coma. When he wakes up after four days, he barely remembers anything. Slowly his memories return, but when Martin tries to find Elizabeth it is only to find himself replaced with another Martin Harris (Aidan Quinn) and Elizabeth not knowing him.

Unknown is exactly what it promises to be: a rather mindless action flick with a convoluted story and very mixed performances. It entertains, but not much more. Nothing less, either. 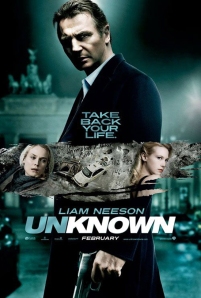 END_OF_DOCUMENT_TOKEN_TO_BE_REPLACED

Giulias Verschwinden is the newest movie by Christoph Schaub, written by Martin Suter and starring Corinna Harfouch and Bruno Ganz.

Plot:
On the way to her fiftieth birthday party, Giulia [For some reason, Julia in the English version] (Corinna Harfouch), unhappy with becoming another year older, meets an interesting stranger (Bruno Ganz).
In the meantime, Leonie (Christine Schorn) celebrates her 80th birthday and tries to escape growing older by behaving like a teenage rebel.
In another meantime, Jessica (Elisa Schlott) who is an actual teenager tries to find a birthday present for her boyfriend. And by find, I mean steal.

Giulias Verschwinden is a nice comedy. Nothing too special but it has some good laughs and a fine cast. It’s no masterpiece but it’s entertaining.

END_OF_DOCUMENT_TOKEN_TO_BE_REPLACED

Plot:
Michael Berg (David Kross/Ralph Fiennes) is fifteen, when he meets Hanna (Kate Winslet), who is about 20 years his senior. They start having an affair and Hanna insists more and more that Michael reads to her. Their affair lasts for a summer, then Hannah disappears.
Michael goes on to study the law. When one of his teachers (Bruno Ganz) brings him to a trial of concentration camp guards, Michael recognises Hanna as one of the accused.
What ensues is a look at responsibility and guilt, pride and choices.

The movie is very well done, but it’s missing one essential thing: the personal connection. You don’t feel with the characters, you don’t care too much about them. All of the important things speak to your head – and that’s not enough to make for a really compelling film.

END_OF_DOCUMENT_TOKEN_TO_BE_REPLACED

Starting with the events of the 2nd of June 1967, where a demonstration in Berlin got out of hand, the movie chronicles the formation of the Baader Meinhof Group and the Red Army Fraction.

The film has a really good cast – basically anyone who has ever had a role in a “serious” movie in Germany was in there (with some curious exceptions) and they really deliver gripping performances. Apart from the obvious talent, it’s also amazing how much they look like their real counterparts.

And it’s one of the most intelligent movies about terrorism I have seen, mostly due to Bruno Ganz‘s character. His insisting that, yes, terrorism is bad, but we should listen to what they go on about so we can get to the root of the problem, really hit home: If people know those kinds of things, why doesn’t anybody do it?

The movie got raving reviews in the German speaking countries, and it’s Germany’s official submission for the Oscars. But there’s been also two major points of criticism. First that the movie is confusing for people, who don’t know their history that well, because not everything is explained and not every character properly introduced and second that it might be dangerous to make a movie from the terrorist’s perspective.

To that I want to respond:

Anyway, summarising: Great movie, one that really has a chance for the Oscars. You might want to read a bit history before watching it, though. 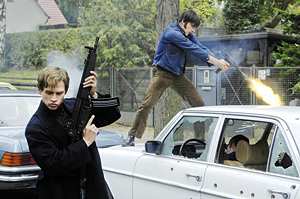