Plot:
After what happened in Amityville Ed (Patrick Wilson) and Lorraine Warren (Vera Farmiga) have agreed to take things slowly and not take on any new cases – at the request of Lorraine who has been having visions and premonitions, and none of the good kind. But when they hear about a case of single mother Peggy (Frances O’Connor) who have been having troubles since moving to a new house, most of all with daughter Janet (Madison Wolfe), the Warrens agree to travel to London to see them and, most likely, debunk whatever is going on. But things turn out differently than they thought.

I very much loved The Conjuring and pretty much all the horror films Wan did so far, so my expectations for The Conjuring 2 were high indeed – and I wasn’t disappointed at all. It’s scary and funny and thoroughly effective. 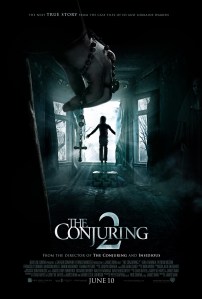 END_OF_DOCUMENT_TOKEN_TO_BE_REPLACED

Plot:
The Perrons, mother Carolyn (Lili Taylor), father Roger (Ron Livingston) and their five daughters, have just moved to a slightly decrepit house. But as soon as they move in, weird things start happening. They uncover a hidden cellar. One of their daughters starts sleepwalking again, another has a new invisible friend. Clocks stop at precisely the same time every night. Pictures fall from walls. As things keep getting worse, Carolyn calls on the help of demonologist Ed Warren (Patrick Wilson) and clairvoyant Lorraine Warren (Vera Farmiga).

After Insidious, I expected big things of The Conjuring. Extremely big things. And I’m happy to say that it absolutely delivered and scared the crap out of me (again).