Plot:
Mike Banning (Gerard Butler) is about to resign from his job in the Secret Service as the bodyguard of President Benjamin Asher (Aaron Eckhart), despite the fact that he and Asher are very close indeed. But Mike’s wife Leah (Radha Mitchell) is expecting and he wants to take it more slowly when the kid arrives. Before that, though, news that the English Prime Minister died reaches Asher. It’s clear that like most of the world’s most prominent politicians, Asher will have to attend the funeral in London and Mike will come with him. But an event like that is the perfect place for an attack – which is just what happens, leaving Mike and Benjamin stranded in London, fighting for survival.

I really hadn’t planned on seeing this. I pretty much hated Olympus Has Fallen (much preferring White House Down) and so putting myself through the sequel seemed like a non-starter. But then puzzledpeaces made puppy eyes at me and I found myself packing a whole lot of alcohol and resigning myself to my fate. It turns out that London Has Fallen is not necessarily a better film than Olympus Has Fallen, but it is more entertaining. Do take that as the very faint praise it is, though. 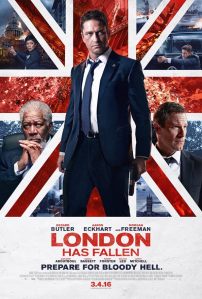 END_OF_DOCUMENT_TOKEN_TO_BE_REPLACED

Plot:
Barney Ross (Sylvester Stallone) and the rest of his crew (Jason Statham, Dolph Lundgren, Terry Crews, Randy Couture, Jet Li) have just freed former Expendable Doc (Wesley Snipes) from prison and are headed to Somalia now to take down an arms dealer. Said arms dealer – Stonebanks (Mel Gibson) – turns out to be another former Expendable, a founding member in fact. The fight quickly turns extremely personal and Barney, worried that they are all too old for the job, decides to find younger fighters to get rid of Stonebanks once and for all.

It might have been the overexposure because of the triple feature (I doubt it) but Expendables 3 didn’t blow me away. It wasn’t as funny as the second one and the host of new characters the throw at you is seriously displaced. 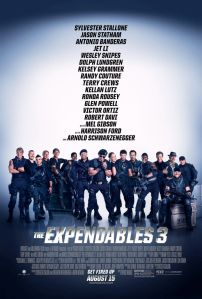 END_OF_DOCUMENT_TOKEN_TO_BE_REPLACED

Plot:
Mike Banning (Gerard Butler) was President Asher’s (Aaron Eckhart) first bodyguard and friend. Until he wasn’t able to safe the life of the First Lady (Ashley Judd). 18 months later he’s working a desk job even though he wants nothing more than to get back at the president’s side. Then the White House is attacked, the president is being held hostage in his own bunker and Mike finds himself in the middle of things, trying his best to save everyone.

I didn’t expect Olympus Has Fallen to be any good. @kathrintha and I went in with a bottle of alcohol and the distinct suspicion that it was going to be awful. We had no idea how awful though and when we ran out of (ready-made) Mojito half-way through, the movie became pretty much unbearable.