Plot:
Kay (Emily Mortimer) and her daughter Sam (Bella Heathcote) make their way to Kay’s mother’s Edna (Robyn Nevin) house. They haven’t been able to reach her for a while and knowing that her memory isn’t what it used to be, they are very worried. And for good reason: Edna is missing. Fortunately, she returns after a few days but she can’t say where she has been. Instead she keeps mentioning that somebody is trying to get into the house. And soon Sam and Kay realize that there is something weird going on indeed.

Relic is a beautiful allegory on dementia and how it affects the entire family. Even though it is not to be taken literally, it is very realistic in that portrayal, reaching a touching emotional truth that is rare.

END_OF_DOCUMENT_TOKEN_TO_BE_REPLACED

Plot:
Many years ago, Mary Poppins (Emily Blunt) stayed with the Banks family to take care of Michael and Jane. Now Michael (Ben Wishaw) is a father and widower himself and he and Jane (Emily Mortimer) try their best to provide everything Michael’s children (Pixie Davies, Nathanael Saleh, Joel Dawson) could need. But they are struggling, emotionially and financially. So Mary Poppins makes a return to the Banks’ home to help them once again.

Mary Poppins Returns is nice enough, but it didn’t really make me happy, given that it doesn’t really know if it is a remake or a sequel, makes some questionable choices, and generally it just doesn’t hold a candle to the old film.

END_OF_DOCUMENT_TOKEN_TO_BE_REPLACED

Plot:
Florence Green (Emily Mortimer) needs a fresh start after her husband’s death. She moves to a small town on the coast and opens a bookshop there. Unwittinlgy she disrupts the local politics with her opening – the powerful Violet Gamart (Patricia Clarkson) had set the sights on her shop. Florence manages to gain the trust and appreciation of a local few – like Edmund Brundish (Bill Nighy) regardless. But her bold choice to promote Nabokov’s Lolita at her store, causes quite an upheaval in town.

I expected The Bookshop to be this romantic, cute film and it does start that way. But then it suddenly throws so much sadness in your face that I could barely handle it. You should definitely be prepared for that.

END_OF_DOCUMENT_TOKEN_TO_BE_REPLACED

Plot:
Ned (Paul Rudd) is an extremely nice guy. He’s so nice, he’s actually stupid and so it happens that he sells dope to a policeman in uniform who tells him that he just had a rough day. When Ned’s released from prison, he falls back into the lives of his sisters Miranda (Elizabeth Banks) – who tries to get her break as a journalist, Liz (Emily Mortimer) – who just tries to make her marriage with documentary film maker Dylan (Steve Coogan) work and Natalie (Zooey Deschanel) – who tries to get her stand-up career going, lovingly supported by her girlfriend Cindy (Rashida Jones). As Ned attempts to get back on his feet, he waltzes through his sisters’ lives and makes a mess of everything – with the best intentions.

I was not going to see this film because I knew that I would not like it. But my mom, gran and sister took me anyway and it was honestly not as bad as I thought it would be. But that still doesn’t mean that it was any good.

END_OF_DOCUMENT_TOKEN_TO_BE_REPLACED

Plot:
After the death of his father (Jude Law), Hugo (Asa Butterfield) started to live in Paris’ Central Station, winding the clocks and trying to rebuild an automaton he and his father were working on. When he tries to steal some cogs from Papa George (Ben Kingsley), he gets caught and George takes the notebook in which Hugo’s father detailed the plans for the automaton. So Hugo enlists Papa George’s ward Isabelle (Chloe Moretz) to get it back. But what is George’s connection to the automaton in the first place?

Hugo is a beautiful, engaging and very entertaining. Plus, it’s basically a love letter to George Méliès – and there’s definitely nothing wrong with that. I really enjoyed every minute of it.

END_OF_DOCUMENT_TOKEN_TO_BE_REPLACED

Plot:
US Marshall Teddy Daniels (Leonardo DiCaprio) and his partner Chuck Aule (Mark Ruffalo) are called to Shutter Island, a mental institution to investigate the mysterious disappearance of a young woman (Emily Mortimer). As soon as they reach the island, a storm hits and they are prevented from leaving. Haunted by his own ghosts from the past, Teddy soon discovers that things are not what they seem on Shutter Island.

While the story is mostly good and Scorsese delivers fine work, the movie hinges on Leonardo DiCaprio’s performance. And boy, does he ever deliver… It was terrific to watch.

END_OF_DOCUMENT_TOKEN_TO_BE_REPLACED

I finally made it to the movies to watch Nim’s Island, Cassandra’s Dream and Lars and the Real Girl.

Nim’s Island was really sweet and funny. It was a tad weird that deadra and me were the only people in the cinema, neither of us being the target audience, but who cares.
The story is how you imagine it to be, the acting is really good. I don’t think that I have seen Jodi Foster acting so joyfully in a long time. Abigail Breslin … what can I say? That girl is amazing. Maddison Joyce (Edmund) was a really great cast. And Gerard Butler… okay, honestly, I can’t say anything objective here. If it were only for his looks, no problem, I can handle that. But then he goes and speaks with an Scottish accent during the movie and I don’t know why, but anytime a guy speaks Scottish, I’m absolutely and hopelessly lost. Then it doesn’t matter anymore, what he talks about and if I understand it (and when they really speak Scottish, I don’t), I just melt away.
Anyhoo… back on track now.
I really loved the opening credits, the artwork was fantastic.
Altogether, great movie, one, I think adults can enjoy as well, if they kept a childish mind. :)

Plus: the coolest flying lizards. 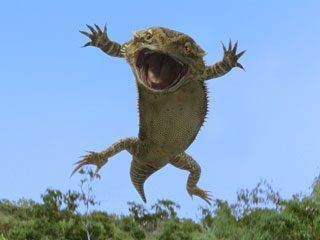 Cassandra’s Dream was a big disappointment. And that although I’m wary of the new Woody Allen movies.
His older ones are great (like Sleeper, Everything You Always Wanted To Know About Sex, Everyone Says I Love You, Zelig, …), but at some point around Anything Else, it all went downhill. Match Point was so bad, I didn’t even watch Scoop anymore [My sister told me it wasn’t so bad. Not so bad is not good enough for a Woody Allen movie].
With Cassandra’s Dream he managed to lure me in again. I mean, I adore Ewan McGregor (I think I mentioned my obsession with Scottish. Unfortunately, he didn’t speak it in that movie) and Colin Farrell can be really talented when he wants to. And both are very fine eye candy. And of course, Tom Wilkinson is a big plus.
And it’s all ruined. Ruined by a film which feels like it’s eight hours long (and eye candy or not, I can’t watch anybody that long… except possibly Christian Bale, if he puts on a good Scottish accent). Ruined by a story as tedious as it’s unrealistic and predictable. Ruined by it’s absolute pointlessness.
I can’t understand it. There you have a writer/director who should know what he’s doing, a really good cast [and really, they played very well, saving the film from getting zero points in my list] and a story that could be engaging (if it wasn’t so boring) and you get a really, really bad movie.
*sigh*

Lars and the Real Girl on the other hand was a perfect little movie.
Ryan Gosling and Emily Mortimer are great, the story is really sweet and it all unfolds in such a calm and unintrusive manner, it’s a real pleasure to watch. And it’s funny.
What more could you wish for in a movie? [Possibly for a Scottish guy, but they can’t be everywhere, now, can they?]