Plot:
Dr. Bennett Omalu (Will Smith) is a pathologist, specialized in neuropathology. He works in Pittsburgh where he is known for being thorough but maybe also a little strange. One day, a former football player’s body – Mike Webster (David Morse) – comes to Omalu. As he conducts his autopsy, Omalu is more and more intrigued by the case: Webster went from fame and glory to absolute destitution, apparent psychosis and suicide in only a short amount of time. And Omalu suspects that brain damage is the reason for his behavior – damage that he got from playing football. But the NFL is not only not interested in hearing his concerns, they are trying to prevent him from finding out more about it.

Concussion tells an interesting story and it does tell it rather effectively. It is hampered by the fact though that it is a very recent story and that obviously they were trying very hard not to scratch too much at recent wounds. 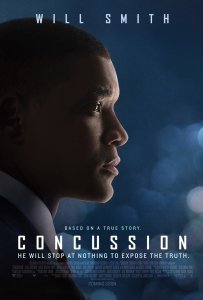