Plot:
In Le naufragé, cyclist Luc (Julien Lucas) is caught with a flat near a small town at the sea. He gets picked up by Sylvain (Vincent Macaigne) who promises to help him, but things take a different turn.
In Un monde sans femmes, Sylvain rents out a holiday apartment to Patricia (Laure Calamy) and her daugher Juliette (Constance Rousseau). Patricia is looking for fun and revels in flirting with the men around her, while Juliette is embarassed by her mom’s behavior. And Sylvain just finds himself caught inbetween.

The reason I have grouped these two movies together like this is that they are basically one movie. They are not only connected by the setting and Sylvain, but also by the atmosphere and the general theme. And I have to say that I liked both a lot. 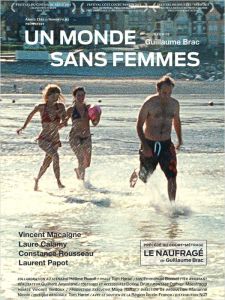