Plot:
Teenaged peasant Joan of Arc (Gemma Arterton) knows that she has a mission to fulfill – voices tell her that she is the one to end the siege of Orléans and to crown the Dauphin (Fisayo Akinade) as King. All she needs is a few men from Robert de Baudricort (Matt Bardock). Baudricort doesn’t really believe her but his Steward (Rory Keenan) does. And faced with Joan’s conviction, Baudricort allows himself to be convinced. So Joan rides off to make her destiny. But not all are taken with Joan’s mission, despite – or maybe because – her success.

Saint Joan is an interesting production in its mixing of period elements with contemporary ones. I also liked this take on Joan, with Arterton shining as always. Nevertheless it falls a little shy of a really great production. 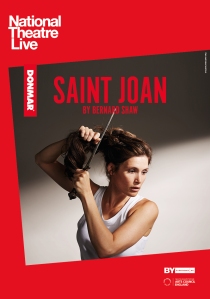 END_OF_DOCUMENT_TOKEN_TO_BE_REPLACED

Plot:
Leontes (Kenneth Branagh), King of Sicily, is visited by his old friend Polixenes (Hadley Fraser), King of Bohemia. When Polixenes wants to leave, Leontes asks his pregnant wife Hermione (Miranda Raison) to convince him to stay. When she succeeds, Leontes believes it’s because she and Polixenes have an affair. Convinced that the child isn’t his, Leontes tries to poison Polixenes and imprisons Hermione, setting events in motion that will have consequences for years to come.

The Winter’s Tale is a mixed bag of beans. While I enjoyed much about it and it really was a high quality production, there were so many unnecessary things that kept adding length when I was hoping for speed that the overall effect was rather meh. 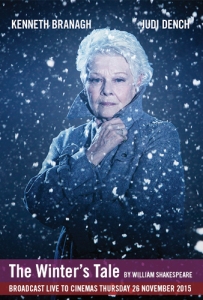 END_OF_DOCUMENT_TOKEN_TO_BE_REPLACED

Plot:
Caius Martius (Tom Hiddleston) is a celebrated general, even though he is not particularly popular with the people of Rome who are starving because the rations go to the military instead of them. Caius Martius fights his blood-enemy Aufidius (Hadley Fraser) in Corioles and is victorious, which gives him enough leverage to run for consul. Even though Caius Martius isn’t completely sold on the idea, his mother (Deborah Findlay) pressures him and he finally caves. But not everyone is a fan of Caius Martius and he quickly finds himself in trouble.

This is a great Coriolanus version. An excellent cast in an interesting set that makes the play shine. Not everything worked for me but it was always interesting to watch. 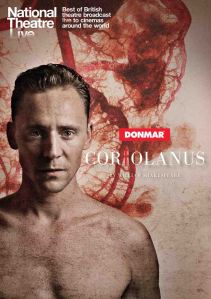