Plot:
After what happened in their home, the Lambert family decide to stay a while with Josh’s (Patrick Wilson) mother Lorraine (Barbara Hershey). But that home brings up memories from the first time Josh was confronted with the Black Bride and Lorraine had to ask Elise (Lin Shaye) and Carl (Stve Coulter) for help. Maybe that’s the reason why Josh is behaving so weirdly. Or maybe there is more to it.

Insidious: Chapter 2 might not be quite as good as the first film, but the difference between the two is so small, it almost disappears entirely. 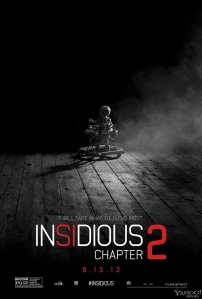