Plot:
Simone (Sarah Stern) and Claire (Julia Piaton) have been dating for three years now. They are very serious, nevertheless Simone has trouble coming out to her religious Jewish parents (Catherine Jacob, Richard Berry), especially since her brother Matt (David Houri) already came out as gay and was never allowed to bring his husband Nathaniel (Lionel Lingelser) to family events. But with her other brother David’s (Arié Elmaleh) wedding coming up, Simone really wants to officially bring Claire. As Simone struggles to figure things out, she finds herself drawn to Wali (Jean-Christophe Folly) with whom she shares a passion for food. That Wali is a man doesn’t make things any easier either.

To Each, Her Own is a story with a bi protagonist filmed by a woman, so I figured I’d give the whole love triangle thing a pass (not a fan of the trope) and give the film a shot. And it was alright, but didn’t blow me away, especially because of the bimisia that permeates the entire film.

END_OF_DOCUMENT_TOKEN_TO_BE_REPLACED

Plot:
Paula (Laetitia Dosch) just broke up with her much older boyfriend Joachim (Grégoire Monsaingeon). Or rather, he left her for an even younger woman. Now all she has to show for the last few years is the cat she took from her ex. But Paula is willing to start over – at any price. First, she finds a place to stay by starting to work as a nanny – a job she only gets by lying. But with that as a starting point, Paula is ready to figure things out.

At the beginning of Jeune femme, I thought that the film would be rather exhausting because I found Paula so exhausting. But as Paula is allowed to grow as a person, she and the film both grew on me. 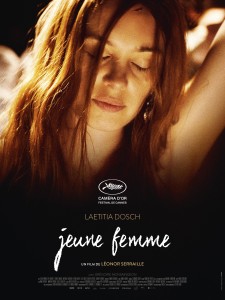