Plot:
It’s been a year since Spencer (Alex Wolff), Martha (Morgan Turner), Fridge (Ser’Darius Blain) and Bethany (Madison Iseman) returned from Jumanji. They finished high school and each set out on their own life. But now the holidays are coming up and they can’t wait to meet again. Only Spencer isn’t actually happy with his life and when his grandfather Eddie (Danny DeVito) tells him that now is the best time of his life, Spencer decides that he’d rather be Bravestone (Dwayne Johnson) again. When his friends, his grandfather and his grandfather’s friend Milo (Danny Glover) all come looking for him, they all end up in the game – and things are different than before. Very different.

I was very pleasantly surprised by Jumanji: Welcome to the Jungle, so I was a little worried that Jumanji: The Next Level would turn out to be the film I feared JWttJ would be. But I’m happy to report that it was a whole lot of fun again.

END_OF_DOCUMENT_TOKEN_TO_BE_REPLACED

Plot:
Alex (Alex Wolff), Fridge (Ser’Darius Blain), Bethany (Madison Iseman) and Martha (Morgan Turner) are all sent to detention and have to clean up the school’s storage room. There they stumble on an old console with the game Jumanji. They decide to play and as each of them choses their character, they get sucked into the video game. And the only way out is through.

I didn’t expect much of a sequel to Jumanji, one of my childhood favorites. But I was pleasantly surprised by the film: it is genuinely funny and extremely entertaining.

END_OF_DOCUMENT_TOKEN_TO_BE_REPLACED

Plot:
Jake (Tom Taylor) has been having visions. Visions of Roland (Idris Elba) who has been on a quest since about forever, trying to keep the Dark Tower that keeps the universe together from falling. But the Tower is under attack from Walter (Matthew McConaughey) and his henchmen. Jake finally connects with Roland for real, realizing that he has a bigger part to play in Roland’s quest than anyone knew.

The Dark Tower is a catastrophe, but as an adaption of the novels (that I haven’t yet all read) and as a film in its own right. Since I heard nothing good about the film beforehand, my expectations were already low, but the film still limbo danced under them with ease. 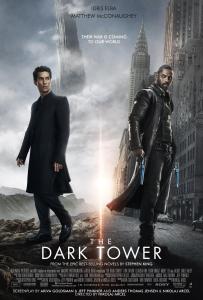 END_OF_DOCUMENT_TOKEN_TO_BE_REPLACED

Plot:
Cassie Sullivan (Chloë Grace Moretz) used to be a normal teenager, but it also used to be a normal world – until aliens attacked Earth. In increasingly destructive waves from EMPs to natural catastrophes and sickness, these aliens have started to decimate the human race. The fourth wave has come and gone, leaving only a fraction of humanity behind, most of them huddling together in refugee camps, awaiting the fifth wave – whatever that will be. Cassie has lost her mother (Maggie Siff), when the army, led by Colonel Vosch (Liev Schreiber), arrives at their refugee camp. Cassie is supposed to go with her brother Sam (Zackary Arthur) and the other children, while her father (Ron Livingston) remains behind. But things go wrong and Cassie finds herself on her own and searching for Sam.

I like young adult dystopia books and films. Usually. But The Fifth Wave is one of the stupidest films I have ever seen. Nothing makes sense and it isn’t even entertaining. I could feel my braincells dying as I watched this shit.