Plot:
The Trolls live a very happy life, carefree and filled with music and definitely not thinking about the Bergens who are only happy when they can eat Trolls. Nobody more so than Princess Poppy (Anna Kendrick). It’s only Branch (Justin Timberlake) who refuses to sing and who fears that the Bergens will be back. Therefore he is constantly trying to prepare for that eventuality. When Poppy throws a big party that actually does attract the Bergens and a few Trolls end up taken, Poppy knows that she has to rescue them. And who could help her better than Branch?

When Trolls came out last year, I decided pretty quickly that I really wasn’t interested in it. I did have Troll dolls when I was a kid, but I was never particularly taken with them and basing a film on them just seemed weird. But my niece loves the film and she wanted to watch it with me, so I did. And it turns out, it’s actually really sweet and funny. 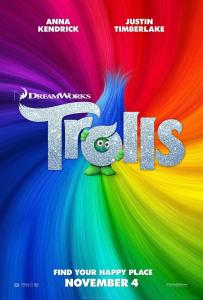 END_OF_DOCUMENT_TOKEN_TO_BE_REPLACED

Plot:
King Arthur (Graham Chapman) is on a quest, as knights are wont to do. First he looks for other knights to join him at the round table. Which sounds easier than it is, and it doesn’t sound easy at all. But Arthur perseveres and when he finally has put a decent group together, God himself appears and gives them all their next job: to go and find the Holy Grail.

It’s been years and years that I last saw Monty Python and the Holy Grail, so when they offered an anniversary cinema screening of it, I knew I had to go. I was surprised by how much of the film is still incredibly fresh in my mind, but whether I remembered it or not, the film is entirely hilarious.

[SPOILERS] [If the film can still be spoiled for you, you need to watch it immediately.]

END_OF_DOCUMENT_TOKEN_TO_BE_REPLACED

Monty Python Live was a special reunion show from the comedy group Monty Python, consisting of John Cleese, Terry Gilliam, Terry Jones, Michael Palin, Graham Chapman (who died a while back and therefore was only there in spirit) and Eric Idle, plus for a lot of sketches Carol Cleveland. They performed it a few times, one of which was streamed to a cinema in Vienna, which made me very happy.

The show basically was a Best of – of The Flying Circus and of their films. There were sketches and songs and general hilarity, mostly performed live, but some things also on video. It was a great evening full of nostalgia and fun.

END_OF_DOCUMENT_TOKEN_TO_BE_REPLACED

Shrek Forever After is the fourth and final Shrek film and the first one to be directed by Mike Mitchell. It stars the voices of Mike Myers, Cameron Diaz, Eddie Murphy, Antonio Banderas, Walt Dohrn, Jon Hamm, Jane Lynch, Julie Andrews and John Cleese.

Plot:
Shrek (Mike Myers) should be happy – he has everything he ever wanted. He married the love of his life, Fiona (Cameron Diaz), he has three kids. His best friend Donkey (Eddie Murphy) comes over regularly. But the routine of it all, and the tourists on Star Tours, wear Shrek down. Out of desperation he makes a deal with Rumpelstiltskin (Walt Dohrn) – Shrek gets one day as a regular, frightening oger, and Rumpel gets one day from his childhood. But Rumpel has ulterior motives, of course, and takes the day Shrek was born – which means that he was never born at all. Now Shrek has only 24 hours to find Fiona, make her fall in love with him and share true love’s kiss to break the deal.

There is nothing technically wrong with Shrek Forever After. But something crucial seems to be lacking from the film. And in the end, it leaves you feeling a little unsatisfied.

END_OF_DOCUMENT_TOKEN_TO_BE_REPLACED

Plot:
Lem (Justin Long) lives on a planet much like ours, if our whole planet would be like the 50s in the USA except populated by little green people. People on Lem’s planet are deathly afraid of being invaded by aliens – so you can imagine the surprise and panic when one day human astronaut Chuck Baker (Dwayne Johnson) lands in the middle of the suburbs of this – as he thought – uninhabitated planet.

I went into this movie not expecting much. It had gotten virtually no advertising and barely 10 cinemas in Vienna were showing it at all (and then only at crappy times). Nevertheless, not one to pass on animated movies/SciFi movies/movies in general, I decided to catch it. And am I glad I did! 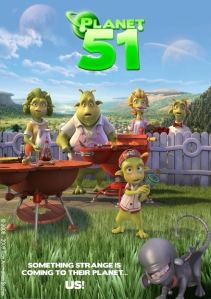 END_OF_DOCUMENT_TOKEN_TO_BE_REPLACED

I’ll keep this review very short: The Day the Earth Stood Still is not only crap, it’s also boring.

Apart from a tired and old storyline (I can’t bring myself to say it’s a plot twist), the acting is mostly wooden. And I so didn’t care about any of it. Blow up the eart already. At least, then I don’t have to watch this crap.

Summarising: Don’t watch, unless you have trouble falling asleep. And even then, I could recommend better movies.