Plot:
Paul (Ethan Hawke) and his dog are travelling on their own when their paths cross with a drunk priest (Burn Gorman) who tries to rob them. Although Paul gets the better of him, after the encounter he decides to pass through the small town of Denton. But trouble follows him there and he finds himself provoked by deputy Gilly (James Ransone). After a quick fight and a polite visit by the Sheriff (John Travolta), things seem to be resolved. But maybe Paul can’t shake Denton quite as quickly as he thought.

In a Valley of Violence is basically John Wick in the Wild West, but since I’m not much of a Western fan, that transfer didn’t completely work for me, although there is much to enjoy about the film. 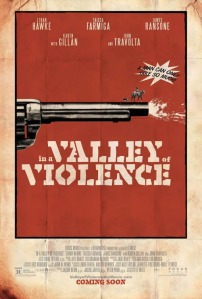 END_OF_DOCUMENT_TOKEN_TO_BE_REPLACED

Plot:
Growing up with her ultra-religious, mentally ill mother (Piper Laurie), Carrie (Sissy Spacek) is an outcast at her school who lacks vital information. Like what a period is. So when she gets it, she’s understandably distressed, a fact her classmates use to bring the bullying to the next level. But what they don’t know is that Carrie also has strange powers that she’s slowly getting the hang of.

Carrie is just a fantastic film that has it all – great cast, great director, great camerawork, great writing. I loved it. Again. 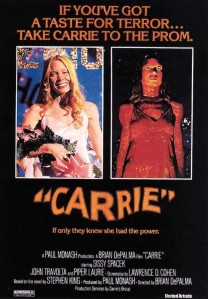 END_OF_DOCUMENT_TOKEN_TO_BE_REPLACED

Plot:
Chon (Taylor Kitsch) and Ben (Aaron Johnson) are best friends and successful drug dealers. They live with O (Blake Lively), the girlfriend of them both. They just received an off for a take-over/partnership from Elena (Salma Hayek), a drug baron from Mexico who is struggling a bit in her position of power. When Chon and Ben don’t plan on taking her up on the offer, Elena has her henchman Lado (Benicio Del Toro) kidnap O. And Ben and Chon will do anything to get her back.

Savages is one of the dumbest movies I have ever seen. And I really do mean ever, fully aware that I have seen Troll 2. It squanders a cast that is not that bad on a script written by people who should be forbidden from so much as looking at a pen or keyboard ever again in the future.

END_OF_DOCUMENT_TOKEN_TO_BE_REPLACED

Plot:
Bolt is the star of his own SciFi TV show, where he has various super powers. Each week he has to save his human, Penny, from unspeakable dangers. Because the film team doesn’t want to compromise his acting ability, they make him think that the show is actually real.
After a particularly cliffhanger-y episode of the show, Bolt manages to escape and tries to save Penny, helped only by his prisoner, the cat Mittens, and his biggest fan, the crazy hamster Rhino.