Plot:
Five years ago, deep sea captain Jonas Taylor (Jason Statham) lost his job, his wife Lori (Jessica McNamee), his reputation after a mission that ended in failure and death – and his explanation that it was all caused by a Megalodon – a long extinct mega shark. Now his expertise as a rescue diver is needed as a submarine was stranded at the bottom of the Mariana trench – a submarine that happens to carry Lori and two other scientists. Called in by oceanographers Zhang (Winston Chao) and Suyin (Bingbing Li) to help, Jonas soon discovers that he faces the same threat he faced back then.

I was looking forward to The Meg so much. I assumed it was going to be the perfect film to get drunk to and enjoy its badness. Imagine my surprise when it turned out that I honestly, unironically, wonderfully just loved the film.

END_OF_DOCUMENT_TOKEN_TO_BE_REPLACED

Plot:
Merlin had three apprentices: Balthazar (Nicolas Cage), Maxim (Alfred Molina) and Veronica (Monica Bellucci). But Maxim betrayed him and worked together with Merlin’s nemesis Morgana. By sacrificing herself, Veronica traps Morgana and herself in a nestling doll, Merlin dies, Maxim flees and Balthazar remains to clean up the mess. Which includes finding the Prime Merlinian, who will be Merlin’s successor – and the only one able to defeat Morgana for good.
Very many years later (meaning: today), Balthazar is in New York and stumbles upon David (Jay Baruchel) – a clumsy nerd living in his own dream world, who turns out to be the seeked after Prime Merlinian.

The Sorcerer’s Apprentice sucks. But since everybody involved knows and accepts that the quality of the movie is less than optimal, they’re having a lot of fun with it. Which means that the audience has a lot of fun as well. It won’t win any awards, it won’t become my favourite movie, but it passes the time nicely. 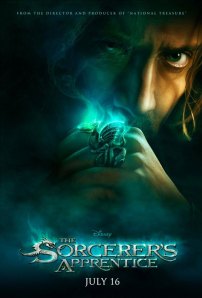