Plot:
Lina (Manal Issa) comes to Paris from Lebanon to study. She is supposed to stay with her aunt and her husband but just before the semester actually starts, her uncle comes on to her. Lina runs away in shock. Without money, a place to stay or much idea about life in Paris, she sets out to build herself a life, with any means necessary.

Peur de Rien tells an interesting story and it tells it well, with one of the most fascinating and intriguing protagonists I’ve seen in a while. Every once in a while it strays a little too much and could have been more concise, but altogether, I really enjoyed it.

END_OF_DOCUMENT_TOKEN_TO_BE_REPLACED

Plot:
Paul Dédalus (Mathieu Almaric) has been living as a diplomat in Tajikistan for a while but now it’s time for him to return to France. His return to France makes him relive some of his most important memories: his difficult childhood with his mentally ill mother (Cécile Garcia-Fogel), a school trip to the USSR when he was a teenager (Quentin Dolmaire) where he engaged in a bit of smuggling, but most imporantly his relationship with Esther (Lou Roy-Lecollinet) whom he falls in love with in his late teens. Their relationship is tempestuous and often destructive, despite their love for each other.

Going into the film, I didn’t know that it was actually kind of the background story, but also continuation of the story Desplechin told in a film 20 years ago (Comment je me suis disputé…); a film I haven’t seen. This fact may explain the weird structure of My Golden Days but regardless, the disjointed nature of the three memories and the unsatisfying way the framing device is left didn’t work any better for me. 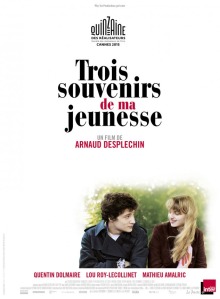 END_OF_DOCUMENT_TOKEN_TO_BE_REPLACED

Plot:
Jimmy Picard (Benicio Del Toro) returned from the war a changed man. His panic attacks have his sister Gayle (Michelle Thrush) worried, so she takes it upon her to find a good doctor for him. They’re referred to a hospital where the doctors think it best to involve an anthropologist, Georges Devereux (Mathieu Amalric), who might be able to tell if Jimmy is actually schizophrenic or just an “Indian”.

Jimmy P. had an excellent cast and the story is really interesting, but everything else was rather “eh”.