Plot:
Lucy (Sandra Bullock) is a lawyer – a good one – with a passion for social activism. That activism has put her at odds with the Wade Corporation on several occasions. When she meets George Wade (Hugh Grant) of said corporation, she is not taken with his charm as the women he ususally surrounds himself with are. Nevertheless when he offers her a job as his lawyer, she accepts, hoping that she can affect change from the inside. But soon Lucy is pretty much responsible for everything in George’s life – and that is more than she signed on for.

Two Weeks Notice is an absolutely pleasant film. It’s light and fluffy and cuddly and utterly inconsequential. There are many worse things a RomCom can be. 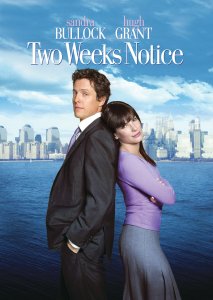 END_OF_DOCUMENT_TOKEN_TO_BE_REPLACED

Plot:
Jake (Tom Taylor) has been having visions. Visions of Roland (Idris Elba) who has been on a quest since about forever, trying to keep the Dark Tower that keeps the universe together from falling. But the Tower is under attack from Walter (Matthew McConaughey) and his henchmen. Jake finally connects with Roland for real, realizing that he has a bigger part to play in Roland’s quest than anyone knew.

The Dark Tower is a catastrophe, but as an adaption of the novels (that I haven’t yet all read) and as a film in its own right. Since I heard nothing good about the film beforehand, my expectations were already low, but the film still limbo danced under them with ease.