Plot:
Shortly after WW2. Juliet Ashton (Lily James) is a successful columnist who recently published a book with collected essays and is now struggling to find a topic for a new book. That’s when she receives a letter from Guernsey from Dawsey Adams (Michiel Huisman). Juliet becomes interested in the history of Guernsey during the war, and in particular the history of the Guernsey Literary and Potato Peel Pie Society Dawsey writes about, and decides that she wants to go there to find the stuff for her new book.

The Guernsey Literary and Potato Peel Pie Society was nice, but I didn’t like it as much as I liked the book, despite many good things. Still, it’s a good watch and will probably motivate you to join/create a book club of your own.

END_OF_DOCUMENT_TOKEN_TO_BE_REPLACED

Plot:
World War II is finally over and all of London is preparing for a huge party. Princess Elizabeth (Sarah Gadon) and Princess Margaret (Bel Powley) would like to join into the festivities, incognito. The King (Rupert Everett) and Queen (Emily Watson) are not really convinced that it’s a good idea, but then give in anyway. Chaperoned by Lieutenatns Pryce (Jack Laskey) and Burridge (Jack Gordon) they make their way into the city. Soon enough though, they not only escape their chaperones but also lose each other. Elizabeth recruits soldier Jack (Jack Reynor) to help her get Margaret home in one piece and before their curfew.

A Royal Night Out was a sweet, fun film that takes absolutely no (narrative) risks whatsoever, transforming the royal family almost ino superhumans in their attempt to be pleasing. 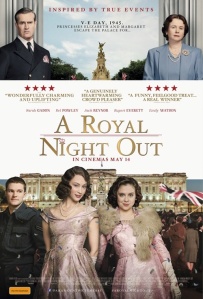