Plot:
The Countess (Alba Rohrwacher) wants a new accessoire, so she heads to the slave market to get herself a black boy. The first Angelo she gets gets ill and dies, unfortunately, so she gets another one. This Angelo (Kenny Nzogang) is hardier. He grows up in her household. Baptized and educated, Angelo Soliman (Makita Samba) becomes the court mascot in Vienna. But he will not be confined to his assigned role.

I’m afraid that I saw Angelo on the wrong day and in the wrong way, so I’m not sure how much of its lack of an effect on me is due to that and how much is the film itself. It definitely does have very strong moments and is interesting in many ways, so I definitely wouldn’t discount it entirely.

END_OF_DOCUMENT_TOKEN_TO_BE_REPLACED

Plot:
A young boy is shot in a supermarket. Just before that happens, the summer holidays stretch seemingly endlessly before Julian (Jack Hofer). In his small town there is barely any place to hang out for teenagers like him, they usually meet in the supermarket parking lot. That’s where Julian meets Marko (Simon Morzé) who just returned from a youth detention center, and through Marko Victor (Christopher Schärf) who is older but likes to be the big guy amid the teenagers. There is not much else that one can aspire to where they live. Select few, like Michael (Dominic Marcus Singer) find a job – in Michael’s case in the supermarket. For the local police, especially for Georg (Rainer Wöss), the teens who are hanging out are an eyesore that should be banned. In the summer heat all of these things come together in an explosive mix.

Einer von uns is more or less based on an actual shooting that happened in Lower Austria in 2009, where the police shot a 14-year-old dead in a supermarket and injured a 16-year-old. Instead of reconstructing the particular events of that shooting, Einer von uns attempts to explain how such a shooting could happen with fictional characters in a real story. It’s a sensitive, critical and thoughtful attempt that I can only recommend watching.

END_OF_DOCUMENT_TOKEN_TO_BE_REPLACED

Plot:
Michael (Michael Fuith) leads a rather normal, if slightly withdrawn life. Apart from Wolfgang (David Rauchenberger), the 10-year-old boy who lives locked up in his basement. The movie chronicles a few months out of their lives together.

Ugh. Pedophilia is never an easy subject and Michael is a hard movie. It’s calm and collected and damn ugly. It is also very well made and effective. But it’s not really a film you can like. 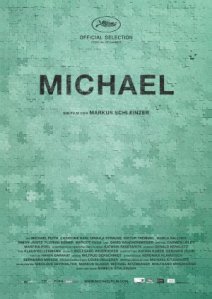