Plot:
Steven (Adrien Brody) works a thankless office job and still lives at  home, where he dreams of becoming a ventriloquist. And one day he decides to actually go for it. He quits his job and starts training, with the support of his best friend Fangora (Milla Jovovich), who dreams of being a successful singer herself. Steven’s unemployment agent Lorena (Vera Farmiga) even finds a job for him, which leads Steven to express his crush on her in a rather unfortunate way. But bit by bit, he pieces his new life together.

I didn’t expect much of this film, despite the cast, because it apparently just disappeared directly into the bargain bin when it came out. But actually tht disappearance was absolutely uncalled for: it is a very sweet movie with a very nice message. 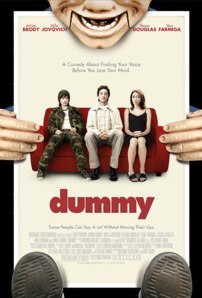 END_OF_DOCUMENT_TOKEN_TO_BE_REPLACED

Plot:
D’Artagnan (Logan Lerman) has dreamt of being a musketeer since about forever. Now he finally gets to go to the big city to fulfill said dream. But the first thing he does instead is get into trouble with Cardinal Richelieu’s (Christoph Waltz) henchman Rochefort (Mads Mikkelsen) and then he makes duel dates with all three of the most famous muketeers: Athos (Matthew Macfadyen), Porthos (Ray Stevenson) and Aramis (Luke Evans). But before they really get down to it, they have to unite against the Cardinal’s men and are quickly drawn into a plot devised by the double-to-quadruple agent Milady (Milla Jovovich).

The Three Musketeers is just as you’d expect it: a movie that leaves most qualities behind and concentrates entirely on fun. It’s awesome.