Plot:
Toby (Adam Driver) is a director who is trying to shoot Don Quixote in the Spanish countryside. He actually attempted this before when he was a film student – and when he stumbles upon a copy of the film he made back then. He is inspired to track down the two key actors of the film, the shoemaker who played Don Quixote (Jonathan Pryce) as well as his Dulcinea, played by Angelica (Joana Ribeiro). But when he discovers that the shoemaker is still convinced that he really is Don Quixote and that Toby is Sancho Panza, Toby is roped into quite an adventure.

The Man Who Killed Don Quixote was 25 years in the making and Gilliam fought hard to have it made. Having seen it now, I wonder whether it was worth the fight. It has its moments, but those really aren’t enough to make the film work.

END_OF_DOCUMENT_TOKEN_TO_BE_REPLACED

Plot:
Nancy (Blake Lively) has been looking for a beach in Mexico where her mother surfed when she was pregnant with her. Since Nancy neither knows the exact location of the beach, nor its name, this has proved to be difficult, but she was finally successful. Leaving her best friend in the hotel, a local (Óscar Jaenada) drives Nancy to the beach so she can get in a good day’s surfing. There is practically no one there and Nancy enjoys the water – until she’s actually all alone and attacked by a shark who cuts off her way back to shore.

There is not a boring minute in The Shallows, although the film does have a few other issues. Nevertheless, I enjoyed it for the most part.

END_OF_DOCUMENT_TOKEN_TO_BE_REPLACED

The Losers is the adaptation of the comic by Andy Diggle and Jock. It was directed by Sylvain White and stars Jeffrey Dean Morgan, Zoe Saldana, Chris Evans, Idris Elba, Columbus Short, Óscar Jaenada and Jason Patric.

Plot:
Led by Clay (Jeffrey Dean Morgan), the Losers are a team of highly trained military men working for the US. When a mission of theirs in Bolivia goes haywire and someone called Max (Jason Patric) starts giving them orders, the Losers start to disobey and finally have to fake their own death. A short while later, they meet the mysterious Aisha (Zoe Saldana) who promises that she can bring them back to the US and will even help them find Max – if they kill him for her.

The Losers is not an artful masterpiece. But it’s a movie filled with wisecracking characters who deliver a new one-liner every two minutes (alternating them with the explosions). It’s mostly well-acted and it’s quite frankly pure fun. 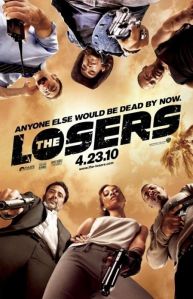