Plot:
The Auditors of Reality think that Death has become too much of a personality t0 continue doing his job, so they sent him away. Unfortunately, they didn’t think about what would happen to the rest of the Discworld when that happens. So while Death uses his skills with a scythe to harvest Mrs. Flitworth’s corn, Windle Poons, recently deceased wizards, fights for his right to actually be dead. But that’s not the only strange thing that happens in the Discworld.

Reaper Man was nice. It just kinda runs its course and its enjoyable, but it’s probably not one of the books that will stick around in my head. 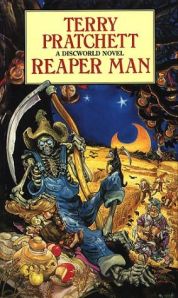