END_OF_DOCUMENT_TOKEN_TO_BE_REPLACED

Plot:
Bad Blake (Jeff Bridges) once was a very successful musician, but since then, he’s become an alcoholic first and a musician second. By chance he meets Jean (Maggie Gyllenhaal), a young music journalist, and he falls in love with her. Jean is cautious because of his alcoholism, but lets him into her life – and the life of her son. At the same time, Bad gets the chance to get back on stage with his former pupil, Tommy Sweet (Colin Farrell). Life seems to go up for Bad, but things have to get worse, before they can get better.

Crazy Heart is an excellent film in some parts, in others, not so much. The performances were great but I felt like the script focussed on the wrong things. The music was wonderful, but the climactic final song was, strangely enough, not the best song. 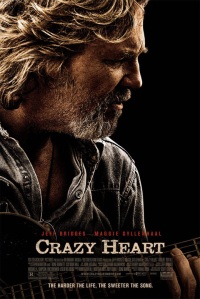