Plot:
Star (Sasha Lane) takes care of her siblings and has to fend off her stepfather’s abuse, if she can at all, so when she meets Jake (Shia LaBeouf) and he offers her a way out – joining him and a whole bus full of kids to drive around the country selling magazine subscriptions – Star jumps at the chance. Probably would have also jumped if there hadn’t been an instant connection between her and Jake, but that certainly helped her decision. But once they are on the road, things become a little more complicated than Star anticipated.

American Honey is a beautiful coming-of-age road movie with great lead performances, looking at a part of America that rarely gets much attention. I was absolutely captivated by it.

END_OF_DOCUMENT_TOKEN_TO_BE_REPLACED

Plot:
Zak (Zack Gottsagen) needs to escape from the retirement home he has been parked at for years, despite the fact that he is very young. He has Down Syndrome and nobody knew where else to put him. Still, he needs to get out, then he can go to Salt Water Redneck’s (Thomas Haden Church) wrestling school. Finally one of his attempts actually works and Zak is off. By chance, he ends up on Tyler’s (Shia LaBeouf) boat. Tyler, too, needs to get out after pretty much destroying all of his chances to ever work as a fisherman in his hometown again. Together, the two strike out to fulfill Zak’s dream.

The Peanut Butter Falcon is a wonderful film. It’s touching, funny and has an eye for the absurd. But most importantly, it unquestioningly centers Zak and his story, never allowing him to become a prop in his own film.

END_OF_DOCUMENT_TOKEN_TO_BE_REPLACED

Plot:
World War II. Don Collier, called Wardaddy (Brad Pitt), is the commanding officer of the tank Fury. With him are Bible (Shia LaBeouf), Gordo (Michael Peña) and Coon-Ass (Jon Bernthal), and the newest addition, the young, inexperienced Norman (Logan Lerman), who isn’t even interested in being a soldier. Together they are sent on a mission that sends them further and further into enemy territory.

Fury starts off in such a way that it raised my hopes that we might get a thoughtful portrayal of what it means to be in a warzone, only to squash these hopes completely under a barrage of heroism blah blah. 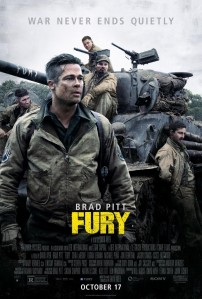 END_OF_DOCUMENT_TOKEN_TO_BE_REPLACED

Plot:
30 years ago, The Weather Underground robbed a bank and shot a guard. Nobody was arrested. Now the FBI managed to arrest Sharon Solarz (Susan Sarandon). Her arrest has journalist Ben Shepard (Shia LaBeouf) digging into the story. He talks to lawyer Jim Grant (Robert Redford) who turns out to have been one of the Weathermen, Nick Sloan. Grant/Sloan goes on the run, but there seems to be more to the story than that.

The Weather Underground are certainly a topic that deserves discussion and cinematic treatment. Unfortunately this movie skirts the interesting bits and ends up being boring, unrealistic and self-congratulatory. 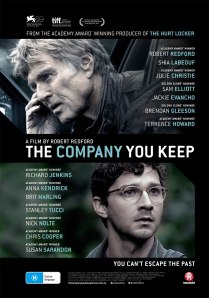 END_OF_DOCUMENT_TOKEN_TO_BE_REPLACED

Plot:
In the depression era, the Bondurant brothers, Jack (Shia LaBeouf), Forrest (Tom Hardy) and Howard (Jason Clarke), are successful bootleggers who have an understanding with the local police and a very good reputation. But then a new deputy – Charlie Rakes (Guy Pearce) – enters the scene. When Rakes doesn’t get what he wants, the pressure rises for the Bondurants. At the same time Jack, the youngest and softest, desperately wants to prove his worth and starts business with the mobster Floyd Banner (Gary Oldman).

Lawless was really great. Basically my only point of contention is that Gary Oldman was in it for a few minutes only (you can never have enough Gary Oldman). 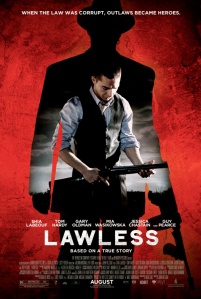 END_OF_DOCUMENT_TOKEN_TO_BE_REPLACED

New York, I Love You is a collection of short films, bundled together because they are all set in New York. The segments were directed by Fatih Akin, Yvan Attal, Allen Hughes, Shunji Iwai, Wen Jiang, Shekhar Kapur, Joshua Marston, Mira Nair, Natalie Portman and Brett Ratner, the transitions between the segments by Randall Balsmeyer. And in the various segments there were Justin Bartha, Rachel Bilson, Orlando Bloom, James Caan, Hayden Christensen, Julie Christie, Bradley Cooper, Shia LaBeouf, Andy Garcia, Ethan Hawke, John Hurt, Cloris Leachman, Blake Lively, Drea de Matteo, Natalie Portman, Maggie Q, Christina Ricci, Eli Wallach, Robin Wright and Anton Yelchin.
I’ll spare you and me the writers, but they are interesting, too. [Also, do not ask how long this paragraph has taken me to write and link. It is better not known for it shows my obsessive-compulsive qualities.]

Plot:
A young woman (Emilie Ohana) drives around New York with her video camera, capturing various stories and moments around her.

The single segments deserve their own reviews (mostly) [which I’ll do after the jump] but overall, I have to admit that I was mostly bored during this movie. The stories weren’t connected enough – I expected a more unifying theme – nor were they representative of New York (unless New York barely has any black, hispanic or Asian people and no none-cis gendered, none-hetero persons either). I think most of the segments would have worked beautifully as short films, but bundling them together to one feature film didn’t work out. 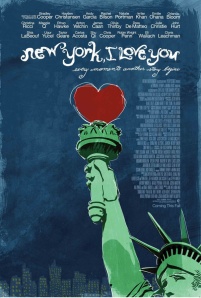