Plot:
Miles Davis (Don Cheadle) hasn’t released new music in a long time. In fact, he was barely seen in public. That’s why journalist Dave Braden (Ewan McGregor) is dead set on profiling him to find out what’s going on and to give his own career a boost. He manages to find his way into Davis’ home and gets quickly involved in Davis’ chaotic, drug-fueled life and his desperate search for the master tapes containing his new music that were stolen from him.

Miles Ahead takes a very liberal approach to Miles Davis’ life, landing somewhere between crime story and biopic and working as neither. I hated almost every second of it. 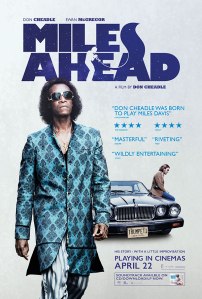