Plot (with Spoilers for Curse of Chucky):
Nica (Fiona Dourif) was arrested for the death of her family – who were actually killed by Chucky (Brad Dourif), or so she believes. Now she’s in psychiatric care and working with a therapist, Dr. Foley (Michael Terriault) to accept the fact that she was the murderer after all. But when Nica is confronted with a Good Guy doll, things take a turn.
At the same Andy (Alex Vincent), too, tries to finally leave his past behind. But that is much easier said than done, especially when he has a very lively reminder in his home.

Cult of Chucky was unfortunately one of the weaker Chucky movies, despite the fact that it was really nice to see pretty much all important characters from all Child’s Play movies so far again.

END_OF_DOCUMENT_TOKEN_TO_BE_REPLACED

Plot:
After the death of her mother Sarah (Chantal Quesnelle), Nica (Fiona Dourif) moves in with her sister Barb (Danielle Bisutti) and her family. Also moving is a doll that was sent to Sarah just before her death. Things quickly start to become very strange, and Nica begins suspecting there is more to that doll than she thought at first.

Curse of Chucky didn’t really blow me away but it was one of the better films of the series. Still there was potential for a better film in there. 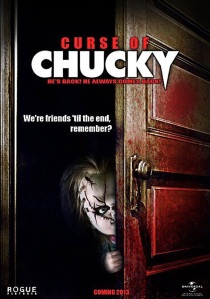