The Secret Service is a comic, written by Mark Millar and illustrated by Dave Gibbons.
Finished on 07.03.2015.

Plot:
Jack London works for the MI6, a very special division. They have recently started to investigate the kidnapping of several celebreties, but their last rescue mission (of Mark Hamill) was a catastrophic failure. And then Jack gets a call from his sister-in-law: her son Gary was arrested and could Jack please help. Jack agrees reluctantly and actually finds that Gary has potential – so he starts to train him for entering the Secret Service, all the while trying to figure out the plans of cellphone tycoon James Arnold.

I’m not much into spy stories, so I’m afraid that I am not much the target audience of The Secret Service – which is a love letter to the genre. But it was rather enjoyable nonetheless, even if it didn’t blow me away. 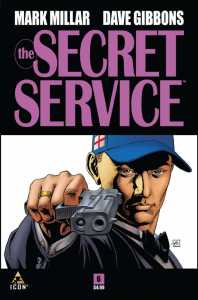