Plot:
Ever since the events in Avengers, Thor (Chris Hemsworth) has done his best to ensure the peace across the realms, while Loki (Tom Hiddleston) is locked up on Asgard. Which means that Thor doesn’t have time for Jane (Natalie Portman) who is still waiting for him. But when Jane stumbles on the Aether, an ancient weapon, Thor comes to her aid, just as Malekith (Christopher Eccleston) comes for the Aether, planning to destroy the universe with it.

As much as I love the first Thor movie – and I do – I have to admit that it doesn’t quite reach the heights that Thor: The Dark World reaches. I can’t remember the last time I laughed so hard in a movie, especially an action movie. It does almost everything completely right and it’s just plain great. 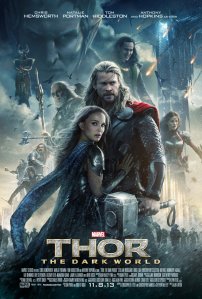