Plot:
Chen Wing Yan (Tony Chui-Wai Leung) has been working for the Hong Kong mafia for a decade and has managed to keep it a secret that he is actually a police officer and keeps feeding information back to him. But he has been doing this for so long, there is practically nobody in the police force left anymore who knows that he is undercover and anyway, he’s ready to come back home. At the same time, Lau Kin Ming (Andy Lau) has been working for the police for a decade as well, when actually he is a member of the mafia. He got used to his life as a police officer and would rather turn his back on the mafia once and for all. Both men are tasked with finding each other and so the hunt begins.

Infernal Affairs is a tense, well-made thriller that managed to draw me in, telling a good story that’s grounded in its characters.

END_OF_DOCUMENT_TOKEN_TO_BE_REPLACED

Plot:
Su Li-Zhen (Maggie Cheung) with her husband and Chow Mo-Wan (Tony Chiu-Wai Leung) with his wife happen to move into the same apartment building on the same day. Their friendly neighborly relationship changes though, when they both realize that their respective spouses have an affair with each other. In trying to figure out how this happened, they start to become closer themselves.

In the Mood for Love is a beautiful, deeply sad film that absolutely made me fall in love with it and then broke my heart. 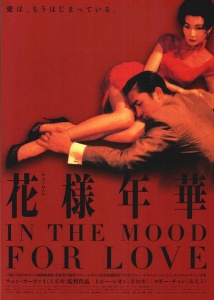 END_OF_DOCUMENT_TOKEN_TO_BE_REPLACED

Plot:
Ip Man (Tony Leung Chiu Wai) is a master of Wing Chun kung-fu, looking back on his life. In the 1930s, his until then rather uneventful existence was disrupted with the arrival of Gong Yutian (Qingxiang Wang) – who managed to unite the martial arts from in Northern China, for which he has chosen an heir, Ma San (Jin Zhang). He now also wants to find a representative for Southern China. Ip Man is chosen to battle him, and by winning his life and the life of Gong Yutian’s daughter Gong Er (Ziyi Zhang) have become forever entwined.

The Grandmaster is a beautiful, beautiful film with great leads and I loved it. Unfortunately the plotting is a little weak. But it’s great to have Wong Kar Wai back. 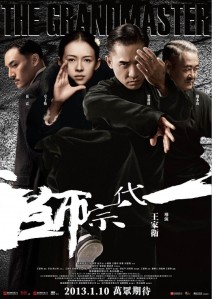