I love me a good conspiracy theory as much as the next person. Elvis never died, but Paul McCartney did. The moon landing never happened, and Mel Gibson owns hundreds of “The Catcher in the Rye” books.

I can go on and on and on… the thing is, I’ve heard most of the big stories in one form of the other. But I hadn’t heard this one before:

Bielefeld does not exist.

Allegedly, Bielefeld is a city in North-Western Germany with about 330.000 inhabitants. But the thing is, it’s actually a huge cover up for an alien space ship. Or a government project. Or something. If you don’t believe me, ask yourself these three questions: 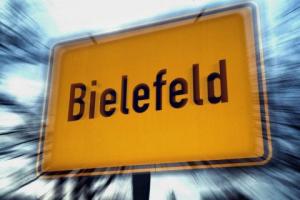 If you still don’t believe me, how about this story? [quote wiki]

And don’t let yourself be convinced that it could be any different. Enough people don’t buy this story, so that the non-existant city council of Bielefeld receives a few calls and letters everyday, with questions about their unbeing. But obviously we have a friend, who works for THEM: There was a pamphlet, telling us that “Bielefeld does exist” (yeah, right, how gullible do you think I am?). And our friend saw to it, that THEY published it on April 1st, giving us the perfect hint.

Be really, really careful, though. This issue is bigger than any of us. THEY are everywhere and I don’t want anything to happen to you, okay?!

Translation:
Mum: Listen, Tobias! Mum and dad are in a witness relocation programme! That’s why we need to move to a place nobody knows exists!
Tobias: To Bielefeld??