Twilight means never having to say you’re kidding. [I can’t wait for the movie!]

2008 in Media Errors and Corrections.

We have been asked to point out that Stuart Kennedy, of Flat E, 38 Don Street, Aberdeen, who appeared at Peterhead Sheriff Court on Monday, had 316 pink, frilly garters confiscated not 316 pink, frilly knickers.
[or]
In a story about Obama’s plans for a vice presidential pick, AP noted that McCain was considering Sen. Joe Lieberman, “the Democratic vice presidential prick in 2000 who now is an independent.” (Emphasis added.)

Shefaly, who is a bit of cool meme central, had this one up on her blog. And how could I resist?

Name one favourite movie for each letter of the English alphabet!

Oh yeah, baby! Before we get started, though, keep this in mind:

It’s rather difficult to do. For some letters, it’s clear. For other letters, I have to decide between 10 movies. The alphabet is unfair like that. When I have to decide, I’ll try to mention the movies which are not as well known. Oh, and there won’t be any movies by Tim Burton on the list. I started to add every single one [except Planet of the Apes] and then I thought, “Screw this! I’ll just tell everybody that Tim Burton is a genius and that they should watch all of them, except Planet of the Apes.”

Okay, but now, let’s get going.

END_OF_DOCUMENT_TOKEN_TO_BE_REPLACED

Krabat is a German movie based on one of the books (in English: The Satanic Mill) by Otfried Preußler, one of the more famous children/young adult authors from Germany. Though I loved his books as a child, Krabat somehow escaped my notice. (A situation I plan to rectify soon.) So, I can’t comment on the book itself. 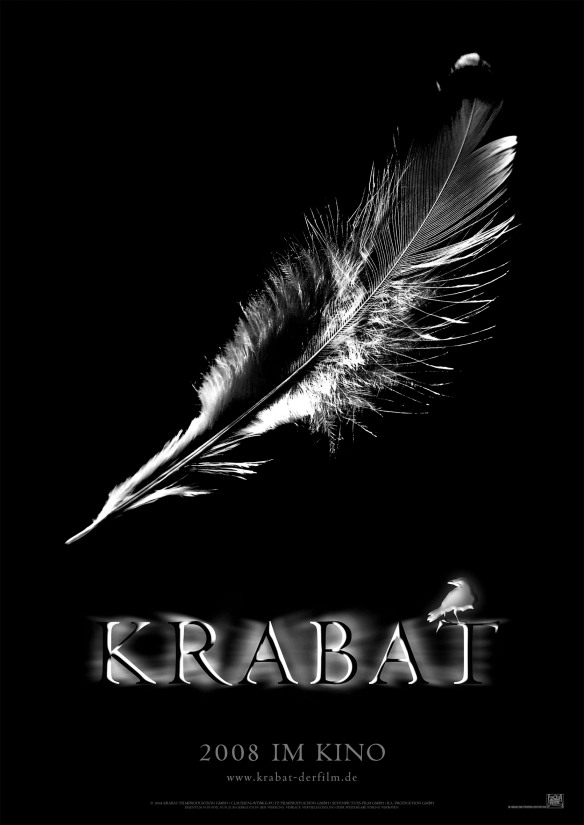 It’s the 18th century. The 30 year war and the pest are plaguing the country, and Krabat took to the streets to beg for his livelihood. He and his friends go from village to village as carollers. But for three nights in a row already, he’s had dreams of crows, a mill and a voice telling him to come. He finally gives into his dreams. He arrives at the mill and gets taken on as one of twelve apprentices. Soon, Krabat finds out that he’s not only being trained as a miller, but also as a dark magician.

The movie is dark. It tackles themes, which are not easy and doesn’t make the mistake to pretend that they are. Death, friendship, love, power – it’s all there. Some critics say that the depth from Preußler’s book disappeared in the movie. I can’t agree. [Neither does Preußler, apparently. (German)]

The cast is mostly good: not surprisingly, Daniel Brühl acts his part convincingly and perfectly. Robert Stadlober does fine in his supporting role, but could have done with a little more character development (or time for that). Christian Redl, and even more so, Christian Redl’s voice are amazing as the master of the mill. Hanno Koffler as Juro is impressive. Unfortunately, the weakest cast member is David Kross, who plays Krabat. While his acting is mostly solid, but nothing special, in the last third of the film I couldn’t concentrate anymore, because he’d grown a moustache. And it was a moustache of the “wipe your face, there’s something on your upper l… oh, that’s nice! You’ve grown a beard!” variety, which drove me completely bonkers.

The best part about the movie were the special effects, though. Some, I admit, were a bit rugged like the CGI crows, Krabats transformation into a crow was a thing of beauty. And when I say a thing of beauty, I mean it was mind-bendingly, tears-in-my-eyes, I-want-to-see-it-again-and-again wonderful.

So, I really enjoyed it. I’d only recommend it to fantasy fans, though. I’ll tell you what I thought of the book when I’ve read it [Christmas holidays coming up, so that’s hopefully soon].

Pride and Prejudice the facebook feed. (via deadra, among others)

A lot of free fiction. From Asimov to King and more.

You can read Nerve: The First Ten Years in its entirety online.

Twilight in Sunnydale, the script:

Oh, and another Twilight in Sunnydale.

Problems with the Watchmen Movie.

Ouverture Movies enables you to download the scripts to The Visitor and Last Chance Harvey.

How to write the perfect disaster movie.

Star Wars, the Musical. No kidding.

Hugh Jackman will host the next Oscars.

How Not to Teach About the Middle Passage.

Holy fucking shit. About the shooting of Road Trip II at a women’s college.

Now, this is fucking amazing: Scientists can recreate the images people are seeing directly from their brains.

Meet Aiko, Fembot you can sleep with, but you don’t. Or do you?

They’re making an adaptation of DC’s fables, a really, really great comic and if you haven’t read it yet, do so right now.

ROFL. Chinese poem turned out to be ad for brothel.

They Fight Crime! If you ever need a plot for a book. Or anything else.

50 famous last words in under 4 minutes:

END_OF_DOCUMENT_TOKEN_TO_BE_REPLACED

Here’s a short meme I found at L.‘s. Tag yourself if you want it. It may help people who don’t know what to get you for Christmas. ;)

Myself, I’ll make a list of things which are either very hard to get or very expensive. Or both. If you don’t know what to get me for Christmas, have a look at the Wishlist.

If you could get any five things in the categories below as a present for yourself, no matter the price, what would you chose?

Movies / TV Shows
[I know, I put  more than five here. But it’s all the TV-Shows I used to watch as a kid and they only come out on DVD slowly about now, I can’t choose betwen them.]
Batman Seasons 1-3
Alfred J. Kwak Seasons 1 and 2
Fraggle Rock Seasons 1-3
The Dog of Flanders [all 52 episodes]
The Story of Perrine [all 53 episodes]
Tao Tao Seasons 1 and 2
The Animals of Farthing Wood Seasons 1-3

Stationery
Just give me pretty notebooks and I’m happy.

Inkheart – the adaptation of the book by Cornelia Funke, which I reviewed here – left me with mixed feelings. On the one hand, it was inspired. On the other hand, it didn’t treat the original material very carefully and stood in its own way.

[Oh, and it kind of kept on growing, so it’s more of an in-depth analysis than a review.]

END_OF_DOCUMENT_TOKEN_TO_BE_REPLACED

Okay, I know, I know, it’s monday and where’s the unusual wikipedia? Well, the answer’s: not here. It’s the last days before christmas which means that I have a lot of tests and exams. Which wouldn’t keep me from doing it, but they disputed the redirect of the collection of Unusual Articles again and I really don’t have time to search for some weirdness myself. Therefore, Unusual Wikipedia Monday is on pause until further notice.

But I promise that I will post some actual content soon – I have a couple of books and a few films, which still need reviews. :)

I’m sure that most people know Ken Kesey‘s One Flew Over the Cuckoo’s Nest, mostly through the Milos Forman movie with Jack Nicholson. For those, who don’t or who need a reminder, it’s the story about some patients in an asylum. Their daily routine is broken by the arrival of a new patient – Randle McMurphy, who stands up against the iron rule of Nurse Ratched.

So far, so easy. The book itself isn’t. It’s a read you have to work for and it takes its time. But it’s worth it. This book is an instant favourite.

The story is narrated by Chief Bromden, a huge half -Native American, who pretends that he is deaf and mute and has been pretending for years. He’s quite definitely paranoid, seeing machinery in everything and the Combine (the combination of all authority figures ever, which keeps surpressing the “common man” without him even noticing) everywhere. But his craziness is very poetic and definitely metaphorical, giving Kesey a huge playground for adding layers of meaning.

It’s at the same time depressing and not at all. The ending’s ambivalent, but it’s also the only logical one.

[I wanted to watch the movie again, because it’s been ages that I did, to compare it to the book. I was convinced that I own the DVD, but apparently I don’t. So, first, I need to get access to the movie. Then I’ll do another post for the comparison. :)]