Blindness is the adaptation of José Saramago‘s book of the same title (my review here). It’s directed by Fernando Meirelles, who’s most famous for The Constant Gardener and Cidade de Deus.

The adaptation is very close to the book and the plot is the same: In a city probably somewhere in Europe people start going blind. But instead of seeing nothing (meaning: all black), they “see” only white. The blindness spreads epidemically. The authorities, in a desperate attempt to stop it, lock the blind people up in an abandoned asylum without any help. There they slowly succumb to chaos and power struggles. The story follows a group of seven people, who are thrown together by these events. 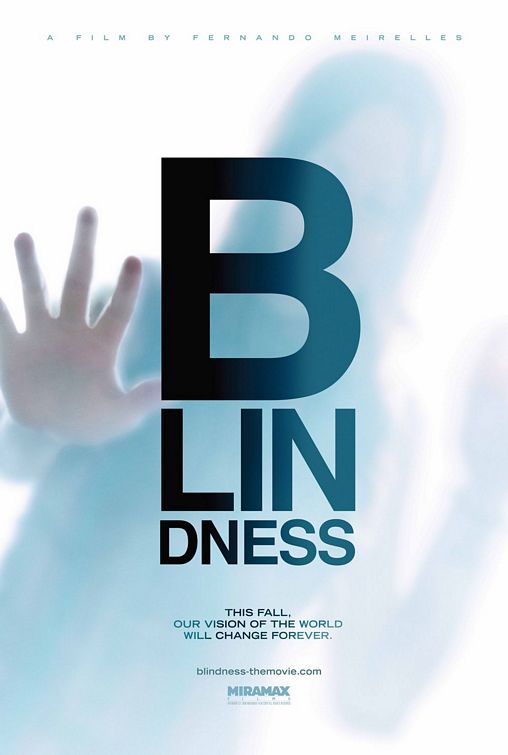 Before I say anything else, I want to point out that portraying blindness in a visual medium is a big challenge, of course. A challenge Meirelles manages admirably. It already starts with the opening credits [unfortunately, they’re not online so I can’t show you], where you have a white background and white writing and continues throughout the movie with white sequences, where you can still see shadows moving, but it’s enough to  be disorienting.

The picture quality was gritty, the actors looked like they didn’t wear any make-up at all. But especially the cinematography was great. Cinematographer César Charlone already collaborated with Meirelles on Cidade de Deus and the Constant Gardener. He has a recognisable style, which fits the theme of the movie very well.

One of the most notable things about both the novel and the movie is its anonymity. Not only do none of the characters have names, nor is it possible to tell where the city is located. The main cast (in the movie, in the novel there’s no mention of it) is white, Latino, Japanese and black. Combining this with the blindness, it gives room to an intimacy between characters that wouldn’t have been possible otherwise. And this intimacy, which is explored in depth, is a great counterpoint to the chaos and the violence that is portrayed.

Speaking of the cast, they were really good. Although I have to admit that I had my problems with Mark Ruffalo – he just looks so young. And he almost makes Julianne Moore look her age. [Almost.] But their acting was fine, especially Julianne Moore, Yusuke Iseya, Yoshino Kimura and Alice Braga.  Gael García Bernal has never been as disgusting, and he’s good at it, too. The only grain of salt: Danny Glover kind of only sits around. He’s practically invisible.

The only thing that really bugged me about it was the scene in the church, where all the statues have white blindfolds and all the paintings have white paint across their eyes. In the book, this is one of the most terrifying scenes I’ve ever read. [And I like horror. And I read a lot of horror.] In the movie, it’s only weird. I think that it was cut too short, Julianne Moore had hardly time to react, you had hardly time to see what was going on and it was over already.

I really don’t know why this movie got so many bad reviews. It sure has its faults – but they’re few and far between. It is pretty disgusting – but that’s kind of the point. It is a very faithful adaptation with great cinematography.

And it’s definitely is worth a view.