De l’autre côté du lit [literally: On the other side of the bed] is an adaptation of Alix Girod de l’Ain’s novel, directed by Pascale Pouzadoux, starring Sophie Marceau, Dany Boon and Antoine Duléry.

Plot:
Ariane (Sophie Marceau) and Hugo (Dany Boon) are married, but their relationship is about to break – they both work their asses off and are trapped in their everyday lives. So, Ariane suggests a change: She will take Hugo’s place and Hugo will take her place. At first, Hugo is hesitant to do this change, but in the end he agrees to save their marriage. So, Ariane takes over Hugo’s company and Hugo gets the kids, Ariane’s job and the renovation of their home.

The idea behind De l’autre côté du lit is cute and interesting but an idea can only take you so far. Unfortunately, nobody seemed to have looked further than the idea and so the movie lacks a bit in the execution. 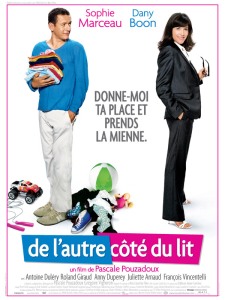 Sophie Marceau is wonderful (and boy, is she beautiful…). Dany Boon channels Louis de Funès, which doesn’t work so well since he isn’t Louis de Funès and this is not a Louis de Funès movie. Antoine Duléry, who plays Ariane and Hugo’s coach, is an absolute delight, though, and definitely the heart of the film.

The movie starts out well, but it felt like they started the story without having thought about the ending and then they suddenly realised that they would have to write an ending and oh my goodness, where should they take it from, it shouldn’t be like this or that and, oh well, let’s just finish it. Kind of took the wind out of the story.

There are some nice laughs in the film, but in the end, the movie doesn’t do the idea justice – and that is its biggest problem. Precisely because it seemed too afraid to offend, it took the coward’s way out and refrained from commenting. Personally, I would have preferred a result that enraged me to just nothing.

Anyway, there’s worse things out there, but it just seems like such a waste in this particular case because it started out so well.

Summarising: It’s a nice film, but you can also skip it.