Plot:
Nick (Michael Cera) plays in a Queer Core band “The Jerk-Offs” with his friends Thom (Aaron Yoo) and Dev (Rafi Gavron), but he happens to be straight. In fact, his girlfriend Tris (Alexis Dziena) just broke up with him and he’s pretty heart-broken, spending most of his times making break-up mix-CDs for her, which Tris throws away, only so that they be rescued by Norah (Kat Dennings).
Then one night it’s announced that famous publicity-shy band “Where’s Fluffy?” will put on a surprise performance, which gets Nick out of his stupor and into a show with his own band, where he meets Norah, who asks him to pretend to be her boyfriend for a minute. But that’s only the start of a crazy night.

Nick and Norah’s Infinite Playlist is a sweet film that doesn’t do anything wrong. And yet, it remains kinda bloodless. I never really got into the story or Nick and Norah as a couple. 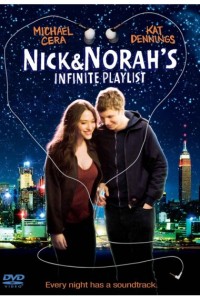 I think the biggest problem I had was that the movie was too adorable: everything was kinda glossed over, rainbows and kittens and such. I mean, you got one girl who is obviously an alcoholic, which serves only as the comic relief. The whole plot lends itself to Hangover-style debauchery [not that I’d want this movie to be any more like The Hangover, thank you very much], but except for said alcoholic there’s not even drinking or anything else and it makes the movie seem too tame, which takes from its energy.

The second biggest problem I’ve had with the film was its convenience – Nick always finds a parking spot right away. The whole group keeps stumbling over each other, even if they set out in completely opposite directions at first. And Norah just picks Nick coincidentally to be her pretend-boyfriend in front of her frenemy and his ex Tris. 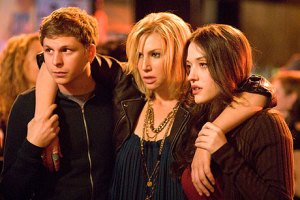 The soundtrack tries so hard to be indie, it almost comes out the other side again, but it is really nice. I really liked the song the Jerk-Offs performed.

Also, the cast is great, most of all Ary Graynor, who is underused and underdeveloped as Caroline, though she makes the most of it. Michael Cera plays the usual guy (that he isn’t tired of that role yet…), which he does well and Kat Dennings gives a fine performance.

Summarising: If you have nothing better to do, you could do worse.